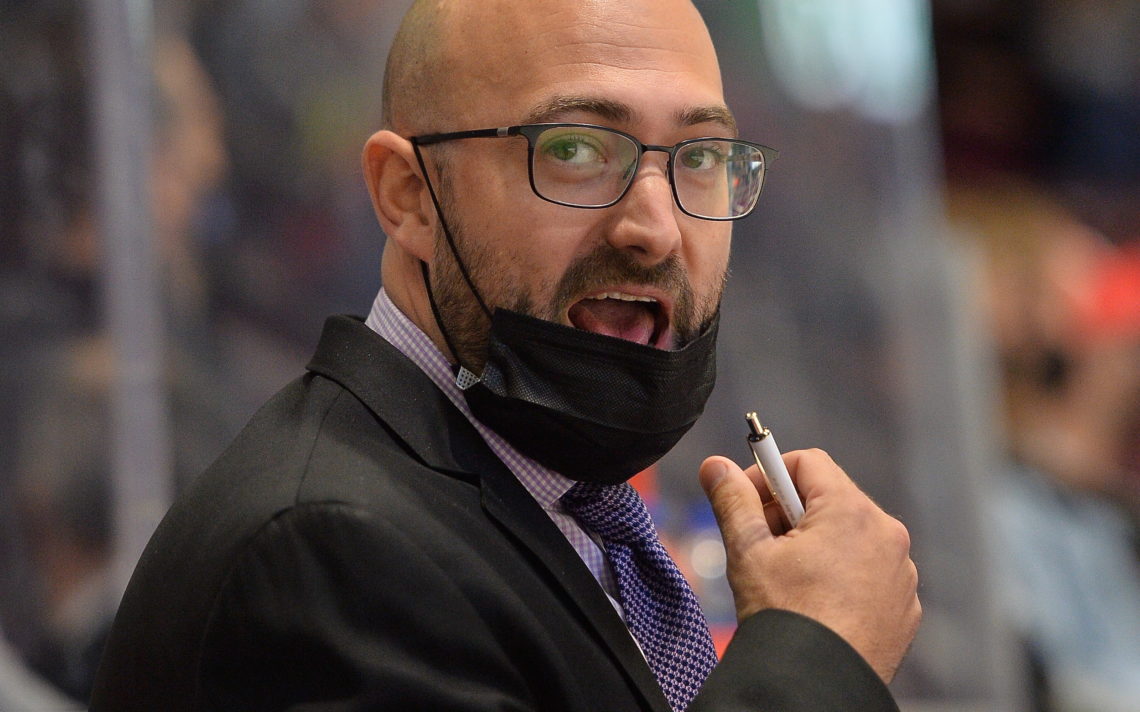 Niagara IceDogs coach Billy Burke was upset with his team’s effort in a 5-4 loss at home to Peterborough Saturday. Photo by: OHL IMAGES.

The Niagara IceDogs must have thought it was Easter weekend instead of Halloween as they laid an egg in a 5-4 loss to the Peterborough Petes in an Ontario Hockey League game Saturday at Meridian Centre.

The final score flattered the IceDogs, who fell behind 2-0 halfway through the first period and only made the score close thanks to a pair of late goals.

“It’s frustrating,” Burke said. “You never like having inconsistent efforts at home.”

Most of Burke’s other answers for the majority of the post-game scrum were brief and to the point, as if he was keeping himself from saying something he might regret.

It was hard to blame him.

Q: Can you get anything out of the late rally or was it too little, too late?

A: “Yep, it was too little, too late but it was a good effort for not quitting.”

Q: You got down early. How much does that change the game plan?

A: “For sure it does, 100 per cent. You know you never want to get down early. Then you’re just chasing the game all day.”

Q: Spent a lot of time in the penalty box last night. Probably too much tonight. What do you have to do as far as that goes?

A: “Yeah, I mean, have to be smarter watching sticks. Honestly, I don’t think they were bad calls. They were penalties. So you know, that’s on us. We have to clean that up and be better.”

Q: Teams go through ups and downs throughout the year. It is one of those things that is just going to happen?

A: “So we have chances to score and couldn’t finish. Bad turnovers.”

A: “Same as always, have to go over video, keep practicing, not the end of the world. Keep it light. Keep it positive, go forward with it that way.”

Down 2-1 early in the second period, the IceDogs had a two-man advantage on the power-play for 1:22, then immediately went back on the power play after not scoring.

Following the power plays, Peterborough netminder Michael Simpson made an incredible, diving stick save which kept the game from being tied 2-2. Seconds later, Tucker Robertson scored for the Petes to give them a 3-1 lead.

Robertson added his second of the game later in the period before Keegan McMullen scored early in the third to pad Peterborough’s lead to 5-1.

Cam Peters scored a highlight reel goal halfway through the third to make it 5-2 before captain Cameron Butler netted two goals, his final with just seven seconds remaining, to conclude the scoring.

Ice cubes: Dakota Betts, Juan Copeland, AJ Cook, Cameron Snow, Jonah DeSimone and Joseph Costanza did not dress for the IceDogs . . . Tye Austin, Josh Kavanaugh, Cole Patey, Mason McTavish, Artem Guryev and Jax Dubois were scratched for the Petes . . . Mason Howard and Anthony Agostinelli were each playing their first home games of the season for the IceDogs after being injured to start the schedule . . . Niagara defenceman Andrew Wycisk earned his first career OHL point with an assist on Peters’ goal in the third.

Up next: Home to Erie Thursday and in Sudbury Friday.