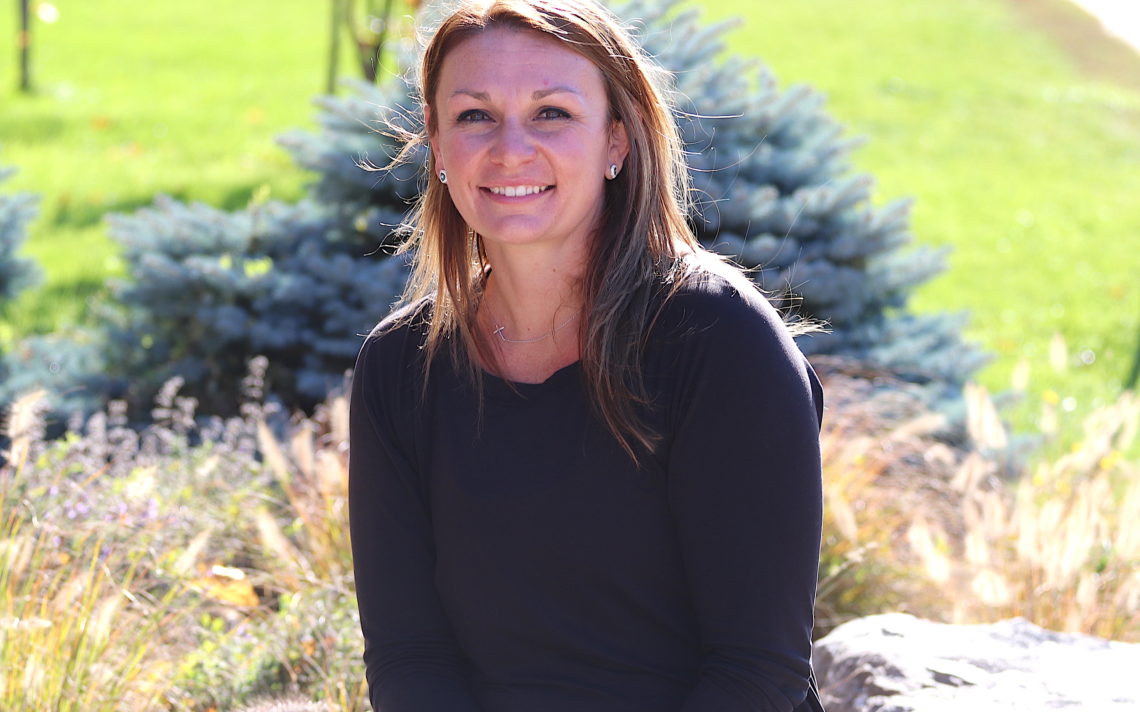 BT’s Queen of the Mats

Megan Schweitzer has made a habit of building high school wrestling powerhouses.

“When I was there, it was Beamsville and us going back and forth as the No. 1 program in both boys and girls,” the physical education and social science teacher said.

The former two-time Canadian university champion at Brock is now into her fifth year of teaching at Blessed Trinity, although, her coaching career is on hold because of the COVID-19 pandemic.

“We have dominated because of the sheer numbers we have on the team.”

“When I first came here, I only had one mat because I had a small program. I only had about 15 kids but now I have about 45 athletes.”

She has built her program inside and outside the school. For the past three years, she teamed with Diane Levign to run a once-a-week wrestling program for kids in Grades 2 to 8. It started out attracting students from Blessed Trinity’s feeder schools but had now become affiliated with the Brock Junior Badgers wrestling program. When running, it attracts more than 20 kids and Blessed Trinity wrestlers pitch in to help out.

Wrestling practices start in October at Blessed Trinity as athletes gear up for the first meet in the second week of November. The team normally practises four times a week, including a cardio day. Practices are held in the morning from 6:30 to 7:15 a.m. and after school from 2:30 to 4 p.m. She averages about 35 kids at each practice.

“If they don’t make three practices a week, I don’t let them compete.”

The hard work had paid off for Schweitzer and her athletes.

“This past year, we had 20 kids compete at OFSAA (Ontario Federation of School Athletic Associations championships),” she said. “One year at DM, I had 26 kids at OFSAA.”

She has a clear goal in mind about where she wants to take the program.

“I would love to place top three as a team at OFSAA and that is the goal for my career. I am hoping I can eventually achieve that.”

This year, her team placed 19th overall out of more than 100 schools and her girls team was ninth.

“Bringing only 20 kids, we did really well.”

As an athlete, Schweitzer had an incredible run of success at OFSAA while representing South Lincoln High School. She was the first woman to win OFSAA four straight years and was part of a team coached by Brian Kilroy that ended up third at OFSAA.

“There was only three of us and we got third place because we all placed top three,” she said.

Kilroy was an important influence on her career.

“He gave me so much of his time and it made me want to give that back because I want my kids to experience that too: having that coach that you have that one-on-one with,” she said. “You get to go to tournaments and experience things. I got to travel the world in high school and it was because of Brian Kilroy. I want to give that to kids too.”

“He was like my other dad. I loved him.”

Kilroy left South Lincoln when Schweitzer was in Grade 10 and she ended up going to Beamsville to work with another local coaching great, Dave Collie.

“Dave had a big part in it too and I trained a lot with Tonya Verbeek at Brock. That’s how Tonya and I became such good friends. I started training with her when I was in Grade 10.”

That base helped Schweitzer forge a five-year career on the national team. She represented Canada at the world championships and was an alternate for the 2008 Summer Olympics.

All her coaches have shaped her wrestling philosophy.

“If you don’t enjoy it, what is the point of doing it?”

Schweitzer’s 11-year-old daughter Ryleigh and eight-year-old son Klaus are both into wrestling.

“I love it but it also stresses me out,” she said.

The COVID-19 pandemic and her son’s bout with cancer — he is now in remission — put a temporary pause on Schweitzer coaching her kids.

“I can’t wait for them to get back to wrestling because I love that part of it.

And she can’t wait to get back to coaching.

“It is my favourite part of being a teacher. I like being in the classroom but I love getting to know the kids outside the classroom and giving back to the community.”

She feels it is important for teachers to coach.

“We need to be role models for good behaviour. It gives back and it shows that dedication and commitment can take you a long way. Sports can take you far.”

“I love seeing kids compete and seeing them realize failure or losing a match is not a bad thing. I don’t think there is failure. It is all about the experiences you have with those kids.”

She has been involved in wrestling for the past 25 years and is obviously a big fan of the sport.

“It’s not an easy sport and it’s very physically and mentally demanding. And that’s what I love about it,” she said. “There were days when I felt like quitting but you rediscover your passion and keep going. I loved winning, I loved being on the mat and competing.”

Like many high schools sports, participation in wrestling has declined in recent years.

“It is not as popular as some of the other sports, especially spectator-wise. Our women are dominating on the international side, but I still think it’s just exposure. And we need more coaches because a lot of the coaches, such as Dave Collie and Brian Kilroy, have retired. We need younger people to step up and coach.”

Those that do will find a close-knit group of coaches that are quick to help and encourage each other.