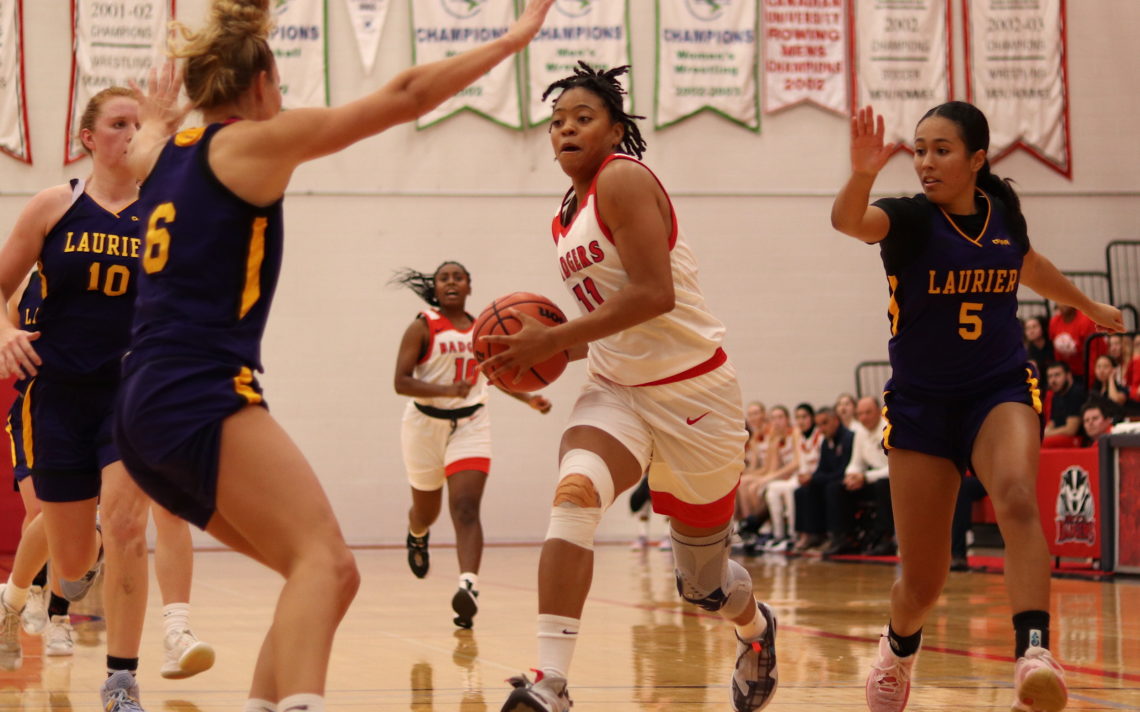 Theresa Brown made the most of her home debut Saturday night with the Brock Badgers women’s basketball team.

The 25-year-old Brampton native scored all 12 of her points in the second half to power Brock to a come-from-behind 60-56 victory over the Wilfrid Laurier Golden Hawks. The 5-foot-10 guard saved her best for when the game was on the line in the final minutes. She forced a tie-up to give Brock the ball with the game tied 56-56 and then scored the final four points of the game to help the Badgers open the season 2-0 in Ontario University Athletics play.

“It was really emotional and it is honestly an honour being able to play for a program that has built a lot over the years,” Brown said, of her home debut. “It is helping me gain a lot of court morals, effort especially and drive.”

Prior to arriving at Brock, the child and youth studies major played at Sheridan and left there as the college’s career leading scorer. After losing the 2020-21 season to the COVID pandemic, Brown red-shirted last season.

Red-shirting was beneficial to Brown.

“It helped me a lot because I was able to watch. When you are able to watch, you get to see a lot of different things and now when you play you have learned.”

“It was tough but it is also a humbling process because I was able to learn new things and get my game better than it was. I used it as a positive.”

She feels being humble is an important attribute.

“It comes from my mom (Allison Brown). I was raised to be humble and appreciate every opportunity that I get.”

Her mom was in attendance Saturday and is a big influence on her daughter’s life.

“She pushes me in everything that I do. I wouldn’t be here without her.”

Brown is in her final year of eligibility and she is planning to savour every moment.

“It is really important to do that especially because of COVID. You never know what is going to happen so you have to appreciate every moment and every opportunity that you get.”

In three exhibition games and two league games, she has noticed a difference in the level of play between college and university ball.

“There’s a lot more teams that are a lot better and play with greater intensity. In the OUA, you really have to come prepared to play every game or else you will have no chance to win.”

“She made some shots which is good and she D-ed it up which was great. That was the key.”

He is glad she is on his roster.

“She is a fifth-year player and she knows what it takes to get there. She is a good player and one of our strongholds.”

Rao was happy with Saturday’s win.

“It was a good win. The last five on the floor did a good job to get us back in the game. The ball moved, we were moving, we found some open people and we made some shots.”

He will take the 2-0 start but is still looking for a complete game effort by his squad.

“Yesterday was a good first half and today the last half of the fourth quarter was good. We are getting pieces but we have a long way to go.”

His first impressions of his team in league play weren’t overly positive.

BPSN Player of the Game: Brock’s Theresa Brown with all 12 of her points in the second half.

Up next: Brock hosts Lakehead Friday at 6 p.m.

Madalyn Weinert had 15 points and eight rebounds Friday as the visiting Badgers opened the OUA regular season with a 70-49 victory over the University of Toronto.