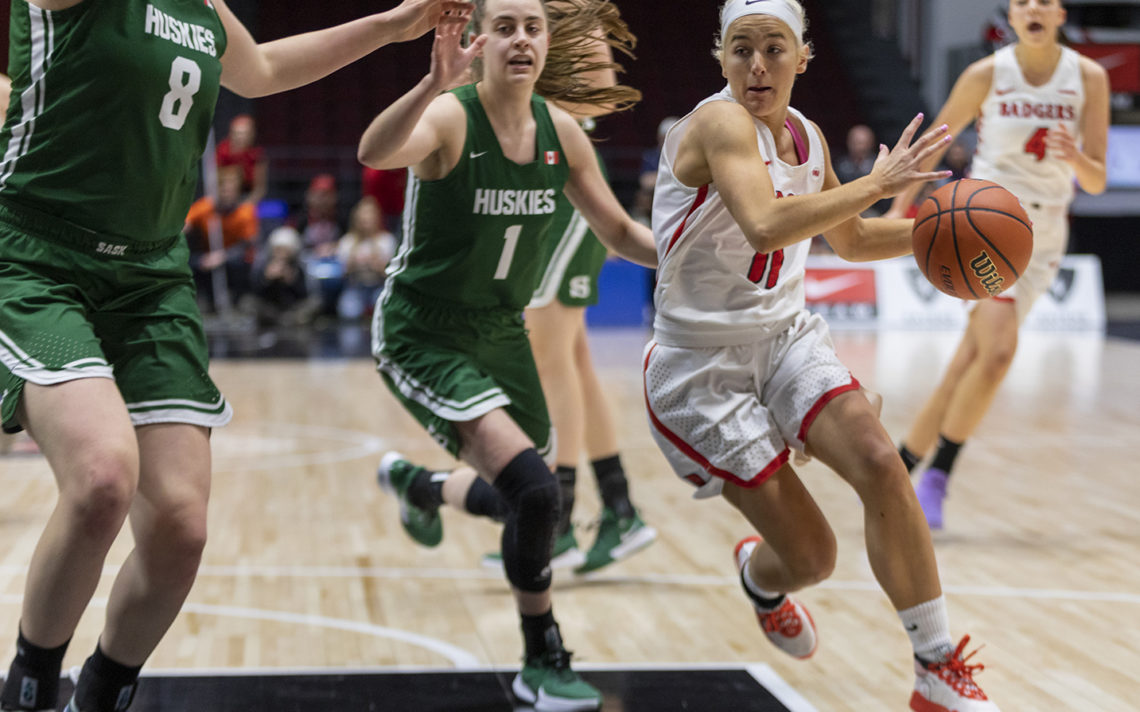 Sam Keltos was obviously emotional Sunday following the Brock Badgers’ 82-64 loss to the Saskatchewan Huskies in the U SPORTS women’s basketball gold medal game at TD Place in Ottawa.

“I am extremely proud of the girls,” the St. Catharines native said. “I have been saying it over and over again that we have been doubted so many times and have overcome so much adversity. To even place second in all of Canada is a tremendous accomplishment and I am crying happy tears right now because I am so happy that we made it.

“I am also sad at the same time because we were so close at being No. 1 and we are not done yet.”

Keltos agreed the Badgers were disappointed but satisfied that they had a great season.

“I am at such a loss for words right now and there are so many emotions running through my head,” she said. “These girls are incredible and I am so happy that we even got here.”

There was certainly no shame losing to the top-ranked Huskies, who have been to nationals 12 times in the last 13 years and played in the gold medal game for the third time in five years, winning twice.

“They are relentless,” Keltos said. “They have shooters outside and they have bigs inside. We were giving it our all, but then we got tired and they kept pushing it and knocking shots down.”

Keltos scored a team-high 21 points in the game and was named Brock’s player of the game as well as a tournament all-star along with teammate Melissa Tatti. The Sir Winston Churchill alumnus has been on a tremendous post-season run, averaging 27.5 points a game over her last four games, including 42 in the Ontario University Athletics final against Ryerson.

“I know my team needs me for my energy and to bring that level of competitiveness,” she said. “Sometimes it is me in the game. Sometimes it is Tatti, Kris (Gallant), Jess (Morris or whoever. We make those shots or we make those big plays.”

Brock head coach Mike Rao agreed Keltos took her game to another level in the playoffs.

“You can see that the more game experience she gets, the better she gets,” he said. “From the beginning of the year until the end of the year she made an 180-degree turn. And she’s getting better.”

Rao, who was named the OUA and U Sports coach of the year, wasn’t in the mood to be congratulated after the final.

“I don’t know if congratulations are in order but it was a good run,” he said.

Rao had tons of praise for the Huskies.

Brock made the finals by defeating Calgary 72-71 in the quarter-finals and UPEI 69-55 in the semifinals.

“I thought we played most of the nationals well and I don’t think it was our best effort tonight but I can’t fault them,“ he said. “Any way you look at it, they are a better team than we are and it showed tonight. But you can’t take away from our effort and the kids never quit.

“It was against the odds and I think everyone knew that.”

Brock had to deal with Keltos picking up her second foul less than five minutes into the game. The Badgers trailed 8-5 at the time and ended up down 18-12 after the first quarter.

Powered by nine points from Jenneke Pilling and a pair of three-pointers from Keltos, Brock grabbed a 31-29 lead halfway through the second quarter. But then the Huskies got hot, hitting four three-pointers and going on a 16-2 run to lead 45-33 at the half.

Saskatchewan opened the fourth quarter with a 7-0 run and effectively put the game away.

Rao, who has already worked miracles with a team that missed the playoffs with a 6-18 record two seasons ago, will miss starters Tatti and Morris next season.

“I hope people don’t expect the same because we will be rebuilding,” he said. “We are going to try to get there again and we will be working hard, but we are going to have some new players.

BPSN Player of the Game: Saskatchewan’s Sabine Dukate with 24 points, including 8-12 from beyond the arc.