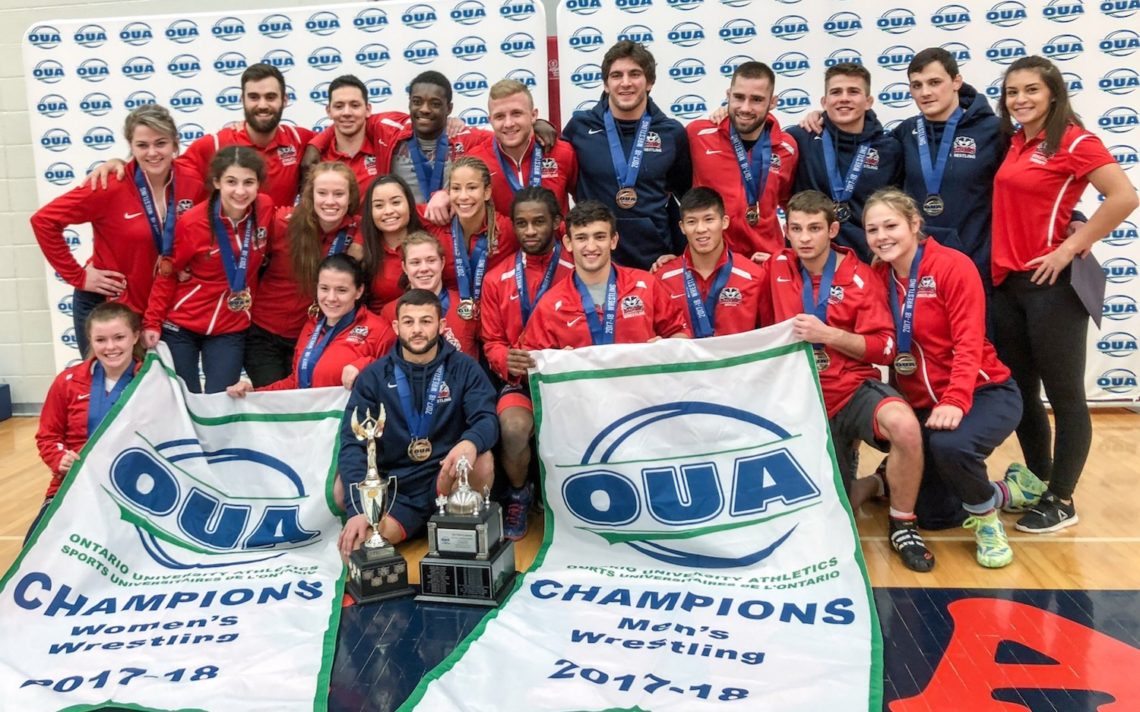 Wrestlers were front and centre when Brock University handed out its athlete of the week awards.

Jagas, a fifth-year biochem student, helped the second-ranked Brock men’s wrestling team to its 20th Ontario University Athletics title. Jagas went 3-0 at 57 kilograms to take home the gold and earn OUA first-team all-star honours. Jagas is now a four-time OUA champ. At the U Sports level, he has a gold, two silvers and a bronze. 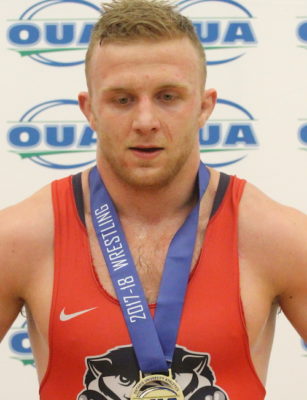 Pye, a third-year psychology student, went 3-0 at 90 kilograms, winning one match by pin and another by technical superiority. He was named an OUA first-team all-star. It was his second OUA title. At the U Sports level, he won silver in 2017 and bronze in 2016. 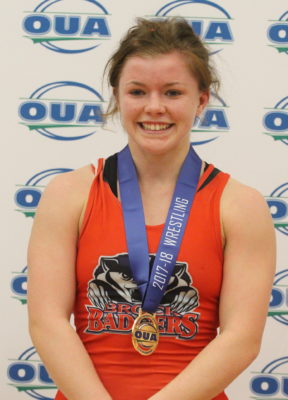 The second-year sport management major went 4-0 to win gold and earn OUA first team all-star honours at 59 kilograms. In defending her OUA crown, she was named the meet’s outstanding female wrestler. The reigning national junior champion and provincial junior and senior champion was a U Sports silver medalist last season.

McLachlan, a first-year medical sciences major, recorded the top performance in Brock women’s squash history. She went 5-0 at the OUA championships to complete the season undefeated. She was named OUA player of the year, rookie of the year and a first team all-star.

Among the other Brock women competing at the OUA championships: Andrea Chaves posted a 3-2 record; Denise Compostella, Claire Shaw and Lauren Hills were 2-3; and, Jarrin Poredos was 0-5.

Leading the Brock men was Mo Hamour. He was named an OUA all-star for his second straight season, finishing with a 4-2 record.

The second-ranked Brock men’s basketball team pushed its record to 20-2 by defeating the Lakehead Thunderwolves 91-87 and 89-62. 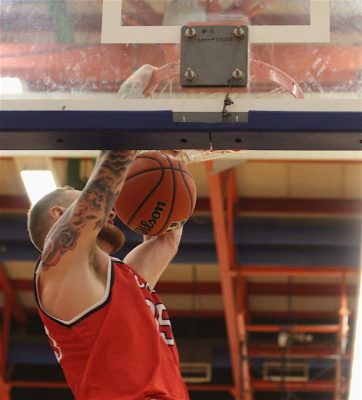 Brock honoured graduating senior Elgadi after the game. Heading into the game, the Waterloo native ranked 12th all-time in OUA scoring for Brock (1,656) and fourth all-time in OUA rebounding (950). In all-time games played, he ranks fifth in career scoring (2,670) and third in rebounds (1463). 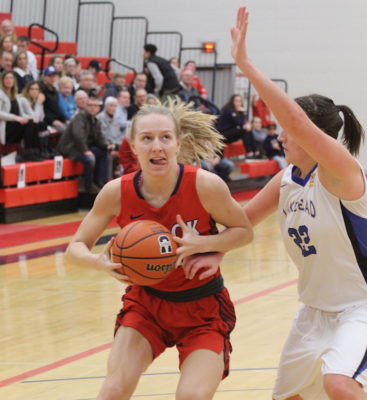 Performing well in the 67-59 setback were: Welland’s Miranda Smith and Kristin Gallant, 14 points each; and, Welland’s Courtney McPherson, 11 points.

Welland’s Brooke Murdoch was honoured after playing her final home game for Brock.

Brock’s men and women conclude the regular season with road games this week versus Western and Windsor.

The Brock men’s hockey team clinched fifth place in the OUA West division by defeating the University of Toronto 3-1 and Ryerson 3-0.

Brock will play fourth-place Laurier in the first round of the playoffs. Brock will host the second game of the series Friday at 7:15 p.m. at the Seymour-Hannah Centre.

Scoring for Brock in the 3-1 win were Mitch Nardi, Ayden MacDonald and Mack Lemmon. Clint Windsor made 40 saves to record the win in goal. Prior to the game, Brock recognized 11 graduating players and graduating student support staff.

In the 3-0 victory, Cosimo Fontana scored twice, Chris Maniccia added a single goal and Alex Brook-Potts made 34 saves to record the shutout.

Brock’s women’s hockey team clinched a playoff spot with a 5-2 victory over Laurentian. Christina Ieradi scored twice for Brock, including her 40th career goal, and singles were netted by Marissa Graham, Annie Berg and Hunter Accursi. Jensen Murphy made 27 saves to record the win in goal.

Brock’s women curling team finished the regular season with an 8-5-3 record following a 5-2 loss to Waterloo and a 7-7 draw with Ryerson.

Brock’s men and women will be competing at this week’s OUA championship bonspiel in Sault Ste. Marie. The men won an OUA bronze last season while the women were eliminated in the quarter-finals. 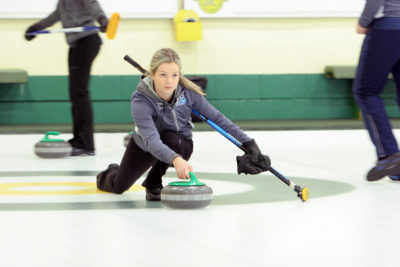 The protection, security and investigations-customs student had a strong tournament at the vice position to help Niagara’s women’s team capture the Ontario Colleges Athletic Association championship.

The former Brock Badger is in her fifth and final year of eligibility for post-secondary sports.

Smith and her team advanced to the Canadian Collegiate Athletic Association national championship in Leduc, Alta., from March 24 to 28.

In the final, Fanshawe recorded three straight singles to force an extra end. Niagara then scored three to give the school its fourth OCAA curling championship and first since 2013.

Other members of the team are: skip Chelsea Brandwood from Beamsville; second Renee Boyce from St. Catharines; and, leads Brooke Fairbanks from Thorold and Andrea Miettinen from Welland. The team is coached by head coach Jordan Thin and Lorelle Weavers.

Cobourg native David Cressman earned the award by helping Niagara to a bronze medal at the OCAA championships, defeating Humber 8-6 in the bronze-medal match.

Cressman, a landscape technician student, was named an OCAA first-team all-star at the lead position and skip Sam Steep, a foundations student, was selected to the second team.

Other members of the team were vice Tyler Marshall and second Ethan Doig.

It was Niagara’s first podium finish since 2011 and advances the rink to the CCAA championships in Leduc, Alta.

Niagara’s women’s basketball team (12-6) strengthened its grip on fourth place in the OCAA West Division with wins over the Lambton Lions and St. Clair Saints.

Leading the way in a 76-49 victory over Lambton were: St. Catharines native Mary Ingribelli, 26 points and 11 rebounds; and, Brooke Cesar, 11 points.

Ingribelli had 33 points and 10 rebounds in a 80-73 triumph over St. Clair, including 13 points in the final quarter. Cesar added 18 points and Fonthill native Courtney Kilyk scored 11.

Versus Lambton, Levi Mukuna hit a three-pointer at the buzzer in an 81-79 win and recorded 30 points and eight rebounds. Jordan Wilson added 21 points, including 14 in the second half.

Performing well for Niagara versus Redeemer were Koslowski with eight kills and Rachel Rivers with six kills.

Against Redeemer, the Knights were paced offensively by Tristan Swinden with 13 points.