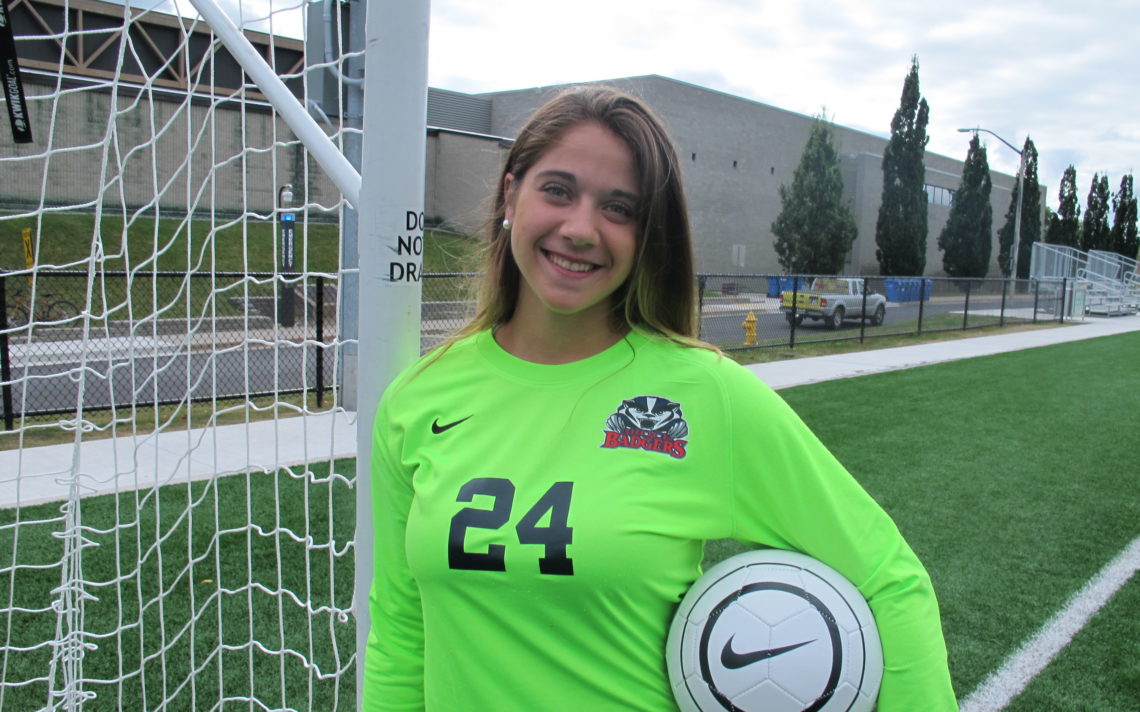 Brock goalie off to crazy start

By Bill Potrecz
Marilena Spagnolo of the Brock Badgers women’s soccer team. PHOTO BY: BILL POTRECZ
Marilena Spagnolo doesn’t even attempt to dispel the notion that goaltenders can be a little whacky.
“Everyone says goalies are crazy and I am crazy,” the 19-year-old St. Catharines native smiled. “I will go for those most dangerous balls ever. It’s a thrill for me. Those shots, when I save them, it’s such a thrill. I feel like I just did something no one else can do. It has its perks.
“It’s that penalty shot moment when you save it and no one else thinks you can do it.”
Crazy or not, Spagnolo is off to a phenomenal start for the Brock Badgers women’s soccer team.
The Sir Winston Churchill graduate was named the female athlete of the week for Brock In two games, she posted a 0-1-1 record allowing just one goal on 16 shots for a .938 save percentage. She also posted her third shutout of the season versus Windsor. In nine games, Spagnolo has allowed just 10 goals for a 1.11 GAA and currently ranks third in OUA saves with 56.
Spagnolo, a second-year kinesiology student, appreciated the award.
“It was nice to hear. It doesn’t really bother me because I try and do the best for each game. I was happy because all the hard work I have done, I finally got one,” she said. “The best part about it was that I just saw how well I was doing. I didn’t even know about it. My team recognized it.”
She also was quick to give credit to her teammates.
“The team positivity, the environment. Everyone supports me. It’s a good environment for me to be in,” she said.
Spagnolo’s success hasn’t come by accident. She works tirelessly honing her craft with Brock goalie coach Mike Folino.
“I’ve been training all year around,” she said. “He pushes me to my max and he pushes me over it, that way I can make the saves that I am comfortable with.
“In practice we go really hard to the extent of getting out of my comfort zone and make those saves. It’s working really well for me.”
Spagnolo has found the harder she works in practice, the easier the games are.
“In practice, we work an hour and he pushes me in different kinds of way with different agility drills, high balls and low balls. When I get to game time, those shots are easy for me and I know what I’m doing.
“It’s also a sense of confidence that I know I can make those saves. It’s just me believing in myself.”
Spagnolo also feels it’s necessary for a goaltender to be able to turn the page after permitting a goal.
“When I was younger I got beaten up a couple of times in games so I always think to myself when a goal gets by me to let it go and it’s a fresh start,” she said. “I just keep it positive and every single half I just keep it 0-0 so it doesn’t affect me.”
Spagnolo began playing soccer when she was three years old, then made the move to goal when she was 10.
“I’ve had nine years of continuous training and learning,” she said.
Spagnolo has worked with Welland Olympian Sabrina D’Angelo and hopes one day to follow in her footsteps.
“She’s a role model and I think I can get to where she is,” Spagnolo said. “It’s a long process but I like where I am right now and I like how I’m stepping up and making these hard saves to put me on top.
“I think my talent can get me there. I just need to keep pushing.”