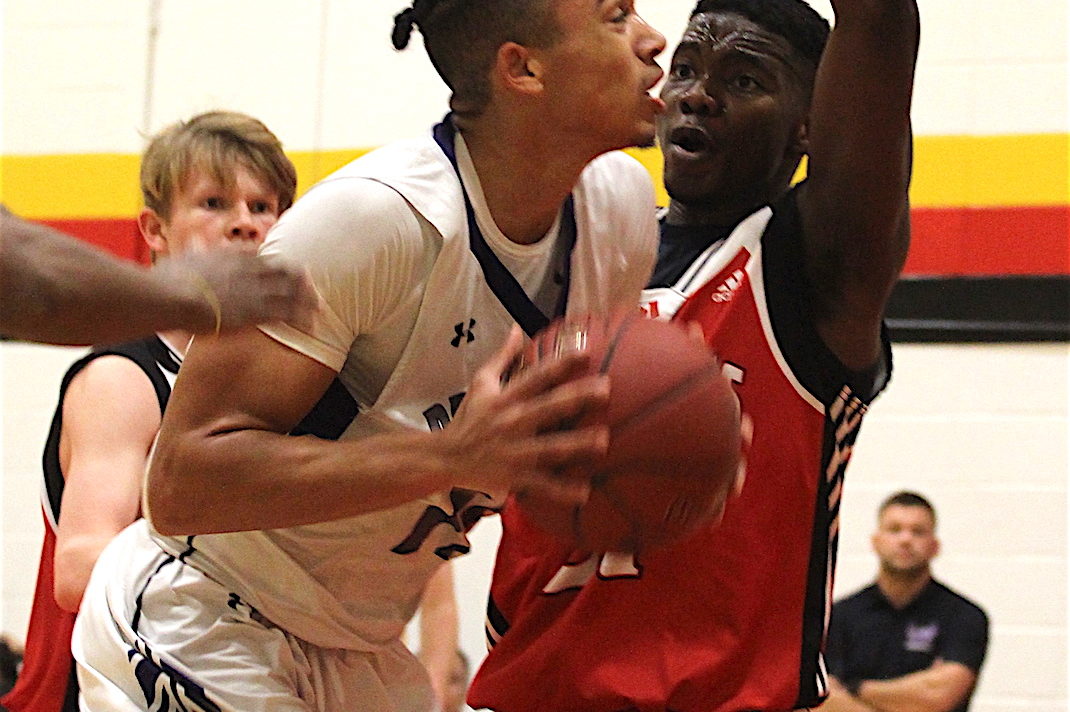 St. Francis basketball player Tyrell MacLennan (11) is shown from action this season.  MacLennan was named to the Zone 4 top 1o team for next Wednesday’s all-star games at Governor Simcoe. Proceeds from Wednesday’s games will go towards a trust fund set up for Tyrell and his sister Kalle. Their mother, Alison MacLennan, passed away in March.

Niagara’s best and brightest boys high school basketball players will be on display at the annual Top 10 and 20 all-star games Wednesday at 6 and 7:30 p.m. at Governor Simcoe.

“It’s a showcase for the kids and an opportunity for Brock and Niagara College to get a viewing of Niagara’s best,” organizing committee member Shaun Feor said.

Coaches are Jon Marcheterre from St. Francis and Feor from Governor Simcoe.

Coaches of the team will be John Kwiatkowski and Marc Dupont from Thorold.

Coaching are Gallagher, Mosley and Labonte.

Each high school in Niagara was asked to nominate three players and from those, the committee chose the players for the top 10 and top 20 teams. Not all schools submitted players, but for the ones that did, at least one player was chosen to compete in one of the two games.

“We try to make sure that every school is represented and we do open it up to everybody,” Feor said. “I would say the top 10 is more of your traditional all-star format. They are the best 10 players and it doesn’t matter how many schools are represented.”

This the second year that Feor and fellow committee members Randy Conlon (Denis Morris coach) and Mosley have organized the games.

Brock University used to run the Kearney Classic boys and girls all-star games and when those folded, former St. Francis coach Pat Sullivan stepped in to organize all-star games for several years. Sullivan was replaced by a group from the Niagara Regional Police and then the games just died out.

Feor reached out to Niagara Region High School Athletic Association basketball convenor Larry Miller about restarting the games at the same time as Mosley came up with the same idea.

“With Frank Keltos and Randy, we all put our heads together and kind of got it rolling again,” Feor said.

Admission is $3 for adults and $2 for students and all proceeds from the game will be donated to a trust fund established for St. Francis star MacLellan and his sister Kalle. They were raised by a single mom, Alison MacLennan, who passed away on March 19.

“In years past, we had always tried to make a donation to a charity and in this situation, Tyrell is essentially orphaned at 18 years old and he has some big decisions to make about his schooling and his career and things like that,” Feor said. “He is unfortunately going to be doing that without the support of a mother or a parent.”

Feor can think of no better cause for the game.

“I had the pleasure of meeting his mom and she was one of those parents who was at his side and very supportive of him,” he said.

Donations can also be made to account number 3492212 at the Meridian Credit Union branch at 106 King St. in St. Catharines. Cheques should be made payable to Paul MacLennan, Peter MacLennan or Jane Jarvis. E transfers can be send to janejarvis53@gmail.com (password is KalleTy).