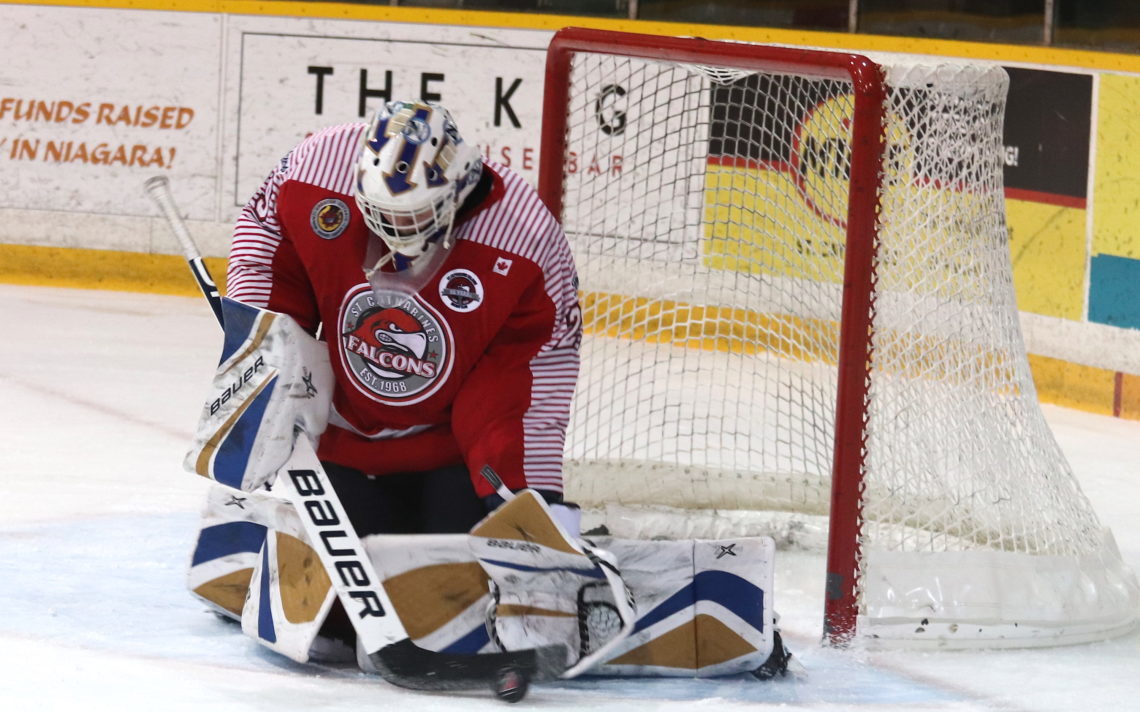 Bonisteel ready to shoulder the load

The St. Catharines Falcons are asking Ben Bonisteel to grow up a little quicker than anticipated.

The 17-year-old backstop has been thrust into the starting job after veteran Blair Coffin left the team when the Falcons were forced to quarantine for two weeks last month after multiple players had tested positive for the coronavirus. The virus was contracted outside the dressing room in a setting of less than 10 people.

Bonisteel seems ready for the challenge.

“Obviously Blair was a guy I learned a lot from and he was huge part of our team so I was sad to see him go,” Bonisteel said. “Now, it’s an opportunity for me that I gain more of a chance to play. That’s huge for me and it’s about going out there and taking the opportunity and hopefully being able to contribute to a few wins this year.”

Falcons coach Tyler Bielby has no qualms about handing the starting job to Bonisteel.

“I think the biggest thing is we have full confidence in Ben going back to last year,” Bielby said. “When we heard that Blair wasn’t coming back, he (Bonisteel) has full confidence in himself so it was as simple as walking up to him and saying, ‘Make sure we’re ready and we believe in you and this is your team as of now.’ 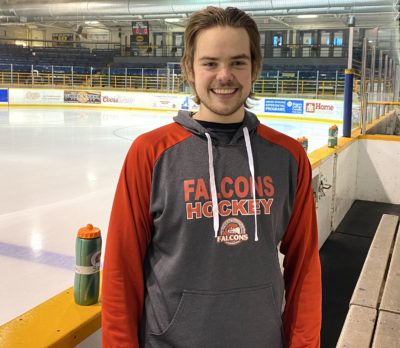 Part of Bielby’s faith in Bonisteel comes from the goaltender’s top-notch work ethic.

“We have full confidence when he’s in the net he can stop pucks and that’s because of the way he prepares and approaches the game,” Bielby said. “He’s the hardest working player on the ice every day and that’s seven days a week. He’s committed to the game and to being an athlete and doing the things it takes to be consistent.”

Bonisteel, a Grade 12 student at E.L. Crossley, traces his work ethic to his upbringing.

“It’s my parents raising me that way,” he said. “I’m from Fenwick and it’s that blue collar, chip on your shoulder (mentality) to say you’re going to go into tryouts against guys from bigger cities with maybe more resources, but I have to give myself the best chance to perform at every level. That’s just something my parents have told me, whether it’s my studies or anything I take up, it’s do the best you can at it.”

Bonisteel, who posted a 1.49 goals-against average for the Niagara North Stars U-18 AAA team last season, suited up in one game for the Falcons and turned back 17 shots to earn a win in his junior B debut.

“It helps a lot. I was here a lot for practices, two to three a week, but it’s a big deal to say I have that game experience and I know the rink size doesn’t change,” he said. “It’s still hockey so all you have to do is go out there and play.”

Bielby has high expectations for Bonsiteel, who was selected in the first round (ninth overall) by the Barrie Colts in the Ontario Hockey League’s U18 draft.

“We believe he can get the job done, and as a result, he’ll be expected to get the job done,” the sophomore bench boss said. “He wants that, he likes that pressure. He wants to be the guy and I think coming off the overage draft last year, as junior B coach, it’s my job to give him the opportunity to make that next step.”

The Falcons have become the odd team out with the Pelham Panthers squaring off versus the Thorold Blackhawks and the Fort Erie Meteors tangling with the Niagara Falls Canucks in non-contact, pre-season scrimmages.

“The biggest thing is making sure as players we compete in practice and we don’t give up on plays in practice so he is forced to make the second, third and fourth save,” Bielby said. “We have to really compete and be strong in front of the net so he can get that feeling and be prepared for a game.

“Going back to the way he prepares, every shot is a challenge to him. Whether it’s a game or practice, he’s constantly learning.”

The Falcons are on the ice four hours a week preparing for the Greater Ontario Junior Hockey League’s regular season to begin. The league has set a Jan. 15 start date, pending government and local health board approvals.

Bielby has been impressed with the way his charges have handled the situation.

Falcon facts: The Falcons have named Trent Glenney as an alternate captain. Brady Caruso was named captain near the beginning of training camp.