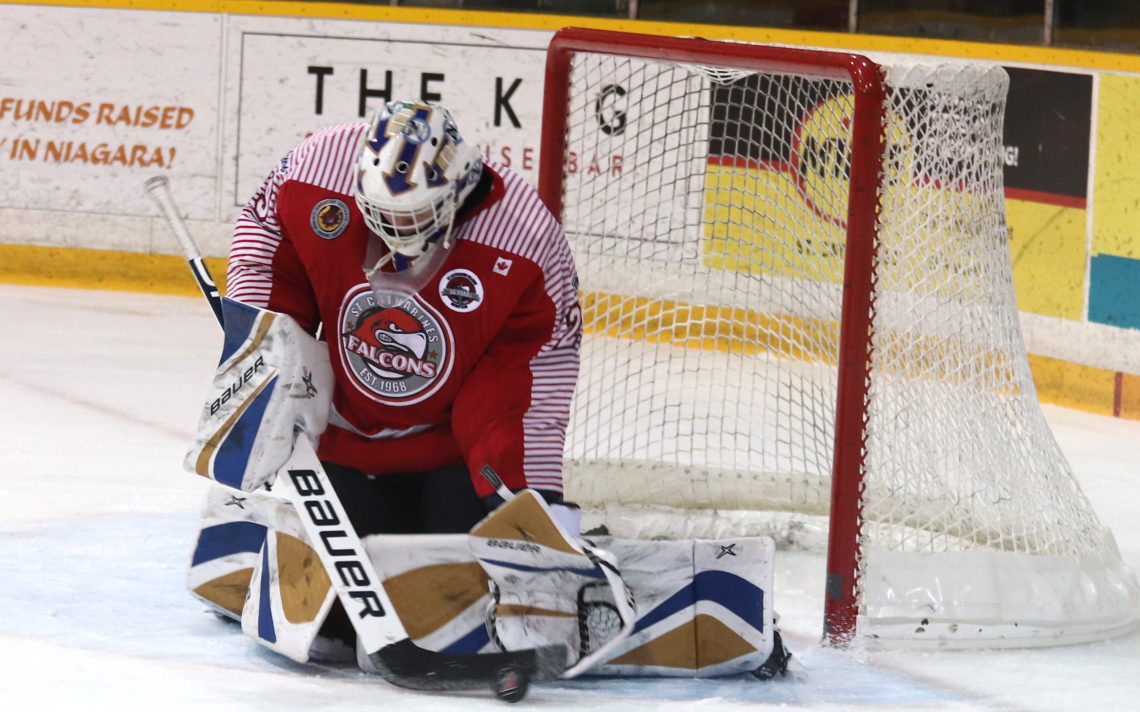 The 6-foot-3, 201-pound goalie was selected in the first round, ninth overall by the Barrie Colts in the Ontario Hockey League’s Under-18 Priority Selection.

The Grade 11 student at E.L. Crossley and his advisor has spoken to a number of OHL teams before the draft but none had said it was definitely selecting him.

“Nothing was guaranteed so I was super excited to see my name across the board.”

Bonisteel, his parents, Gord and Veronica, and sister, Emily followed the draft on YouTube and heard the Barrie Colts go to the microphone and call his name.

“There was dead silence and then we could hear them pick up the mic,” he said. “I kind of looked at my dad, we were all pretty excited and there were a lot of emotions coming out.”

Bonisteel was speechless in the moment.

“I hugged my family and it was a pretty special moment to share with all of them.”

Wednesday was in stark contrast to 2019 when Bonisteel wasn’t picked in the OHL Priority Selection.

“I tried not to get too excited because I had gotten some calls, but I didn’t want to set myself up for kind of a fall like last year,” he said. “It was great to see my name come up on the board after going undrafted last year.”

Bonisteel, who was the only local goalie among 16 goaltenders invited to the 2019 OHL Draft Combine, used last year’s snub as motivation.

“I wouldn’t change going undrafted last year for the world,” he said. “It turned out great and it gave me the kick in the ass I needed and the extra motivation. I am keeping that chip on my shoulder this year going into my training now.

“The work never stops. It just gets more and more and I am super excited for the journey.”

He felt me made improvements in his play this season.

“I took big strides in my fitness level, losing a lot of weight over the past summer and past season and that helped me be more agile in my net,” he said. “I was a lot calmer and was more efficient this year in my movements.”

Bonisteel, who lost 30 pounds in the last year, had a 1.49 goals-against average in 17 games for the Niagara North Stars this past season. As an affiliated player with the St. Catharines Falcons, he started and won one game, and practised with the squad for most of the season.

His time with the Falcons was most beneficial.

“It was a big deal because early in the year I wasn’t sure who I was going to AP (affiliated player) with,” he said.

Early in the season, he received a call from the Falcons, who needed him on the bench for a game.

“I went to a few practices and from there the coaches and the organization were nothing but gold to me and told me that I could come out whenever I wanted,” he said. “Even though some of the practices I wouldn’t get the most shots, it would be an hour to spend on my movement and I think that really helped my game.”

It certainly helped when he saw action at practice.

“Obviously, facing the harder and faster shots from even a few ex-OHL guys on the team really helped me transition back to midget and when I did play the game up with the Falcons.”

“They said that they were excited to get me with their pick, they laid out some next steps for me and wished me luck in my training leading up to the camp,” he said.

Those next steps are to: stay fit during the COVID-19 pandemic and improve his fitness level; get better at owning his crease and being as mobile as possible; and, reading the play, which will help him with puckhandling and every aspect of the game.

If the world gets back to normal, Bonisteel would attend Barrie’s rookie camp in June with the hope of earning an invitation to the main camp. If not, the main camp would be his first time on the ice for the Colts.