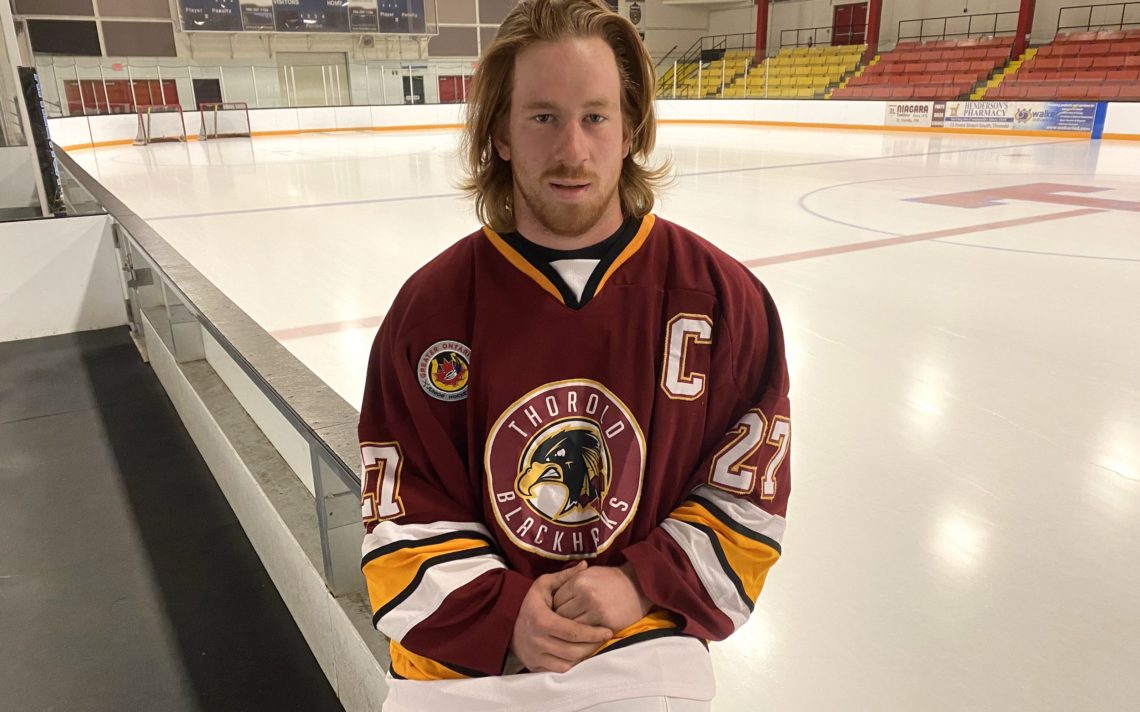 Austin Jensen was a natural to wear the captain’s C for the Thorold Blackhawks this season.

“He’s our first four-year player with me,” Barnes said. “We have probably the best relationship I’ve ever had with a captain because it’s been four years in the making.”

Jensen, a tough, no-nonsense defenceman, was thrilled when approached by Barnes to wear the C.

“I was just hoping for it. This is my fourth year here now and I feel like I worked hard for it,” he said.

Barnes feels Jensen has all the attributes to be a good captain.

“He’s just a guy who’s been a leader on this team for the last couple of years organizing team events and having guys over to his house,” Barnes said. “He brings guys together and he’s just a really good kid. He looks after the young guys and makes sure they’re taken care of, but he’ll also deal with any issues.”

Jensen feels it is important to lead by example.

“I feel like you have to be a good guy,” he said. “Show you are there for them but also be a kind of a hard-ass when they do mess up. You have to play both parts and make sure things stay afloat.

“For the most part, it’s been a pretty good group of guys each year. That’s all you can ask for.”

“Playing minor hockey, you hang out with a few kids on the team but teams don’t gel like they do in minor hockey,” he said. “You get a group of the guys going out, even if it’s just to see a movie, just getting them together really helps the team gel on and off the ice. It really loosens things up a bit.”

Joining Jensen in the leadership department this season will be defenceman Ethan Mercer and forward Sam Vanderzalm. Dylan Scriver was also scheduled to wear an A but received an offer to player pro in Sweden and will be leaving this week.

“They’re all good kids,” Barnes said. “They’re not the biggest, loudest talkers, but they’ll lead by example and put the hammer down when needed.

“All those guys have no problem coming to me if there is an issue in the room. I tell those guys to make sure things are going well in the room. Hopefully things don’t get to me, but if it does, then we’ll try and fix it.”

Barnes has kept off-ice issues to a minimum by weeding out any potential problems when recruiting.

The Blackhawks have been practising four days a week for almost two months and this month will bubble with the Pelham Panthers for scrimmages in anticipation of the Greater Ontario Junior Hockey League opening Dec. 2.

As well, the Blackhawks are working out twice a week with Dan Giancola at BTO Performance in Thorold.

“It’s been great,” Barnes said. “That camaraderie, just pushing each other off the ice and getting to know each other. With no games you don’t get that battle together. Usually that’s what happens in the heat of a game you’re sticking up for your teammates and you get to know each other that way.”