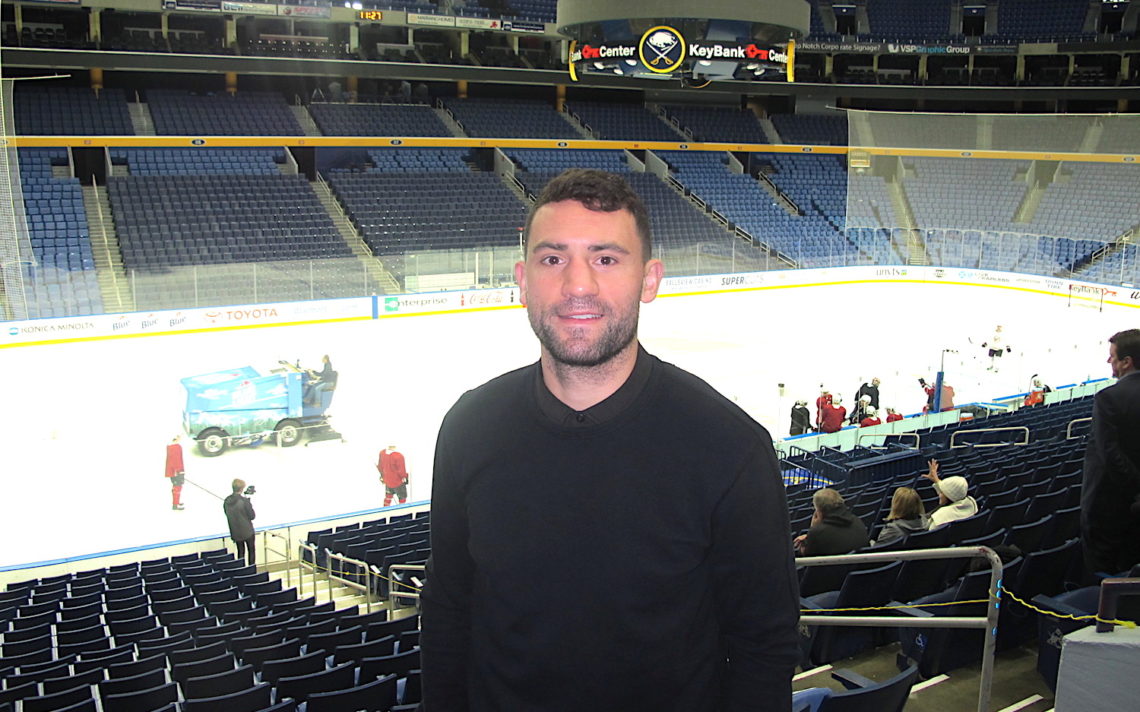 Welland native Paul Bissonnette has carved out a second career as a radio broadcaster for Phoenix Coyotes games. Photo by Bill Potrecz

For 12 seasons as a professional hockey player, Paul Bissonnette had a well-earned reputation as an enforcer, the kind of player who would drop his gloves in a heartbeat to defend a teammate regardless of the size of the opponent.

The 33-year-old Welland native’s career statistics bore out that reputation: In 207 NHL games played with the Arizona Coyotes and Pittsburgh Penguins, the truculent winger collected seven goals, 22 points and 340 minutes in penalties.

But while Bissonnette’s role on the ice was as a policeman, off the ice he was known as a comedian, the class clown who always had something funny or clever to say.

Bissonnette’s outgoing personality seemed a match made in heaven for social media so in August of 2010 he signed on Twitter@BizNasty2point0 and a star was born.

Bissonnette quickly became a hit on the social media platform and today has more than one million followers and is verified.

“I was always a bit of a clown when I was growing up and it was recommended to me to jump on Twitter as an outlet to joke around with fans and stuff,” Bissonnette said. “I was hesitant at first and then it kind of took off. It’s not for everyone. I’m just happy it opened doors for me and now looking where it has gone, I’m very grateful I started it.

Bissonnette’s social media prowess, his personality and willingness to poke fun at others as well as himself, has led to a career in broadcasting where he works as the Phoenix Coyotes colour analyst on radio along with his partner, Bob Heetuis.

“I think it was time to retire. I was dealing with a lot of injuries and I’d been talking with the Coyotes about the media side and they felt it would be a good fit to join them when I was done playing,” Bissonnette said. “I was slowly getting into the media side with social media becoming a big thing and they wanted to tap into that resource and it ended up be a pretty good fit.

“I think the year has kind of exceeded my expectations.”

Bissonnette brings his personalty and a humorous side to the broadcasts.

“I’m here more for the fun stuff, joke around and keep it light,” he said.

Bissonnette admits he still thinks of himself as a player — he played 18 games in the American Hockey League last season — more than a journalist.

“The biggest thing is not being critical at all and trying to keep your credibility which I probably haven’t done a great job of this year. I’m still friends and have played with some of these guys and can understand how hard it is sometimes and what they go through,” he said candidly.

“The media side, it’s maybe not their job to care. They just have to be critical when they have to be. I don’t think that’s the main reason I’m here. If I want to advance on that side of it on my career, I’ll have to call it more like it is than sugarcoating it. For now, I’m not really concerned with that.”

Bissonnette admits his current position fits him like a glove. 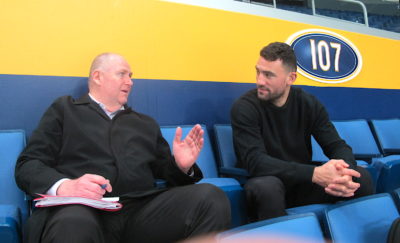 “I didn’t really know anything (else) I could go into. Maybe coaching, but that’s a bit of a grind these days of what’s expected and I would have started out at a really low level,” he said. “Considering I’ve grown my brand pretty big on social media, I set myself up nicely for the second part of my career.”

Bissonnette grew up in Welland and played minor hockey there before moving on the Ontario Hockey League with the North Bay Centennials, Saginaw Spirt and Owen Sound Attack.

He is one of several players from the Rose City who have played in the NHL and is proud of his hometown.

“I miss Welland. I love the people there but I just grew out of it a little bit,” he said. “There’s nothing there for me as far as media or working but I’m thankful for the community I grew up in and for so many people who helped me get to where I am. We had such good minor hockey coaches.”

“They all carved out solid careers,” he said proudly. “It was a good time in my life in Welland.”

Bissonnette doesn’t get home much — he lives in Vancouver in the summer — but his parents, Cam and Yolande, still reside there.

“I built a house in Welland and my parent’s house burned down so they moved into my place so it worked out perfectly,” he said.

Bissonnette loves living in the Phoenix area even if things haven’t gone smoothly for the team, on or off the ice.

“When things we going well it was awesome,” he said. “Things are starting to go a little better so it’s picked up. The start of the season was pretty rough, especially on the guys. There was a lot of criticism on the organization as a whole and people were fed up.”

The Coyotes do possess a collection of promising young players, including former Niagara IceDog Brendan Perlini, so things could turn around in a hurry.

“I think they have done a good job of accumulating draft picks and drafting and developing guys.

Once the team starts doing well then it will be easy to evaluate where they will be at as an organization and as a place to play hockey,” he said. “When I was there and we were making the playoffs we were drawing well and it was fun.”

And if things don’t go as planned at the rink, there’s always the weather.

“It’s awesome,” Bissonnette smiled. “You can go in the sun and lay by the poll and feel good about yourself and then you go to the rink and turn it on. It’s a good separation.”