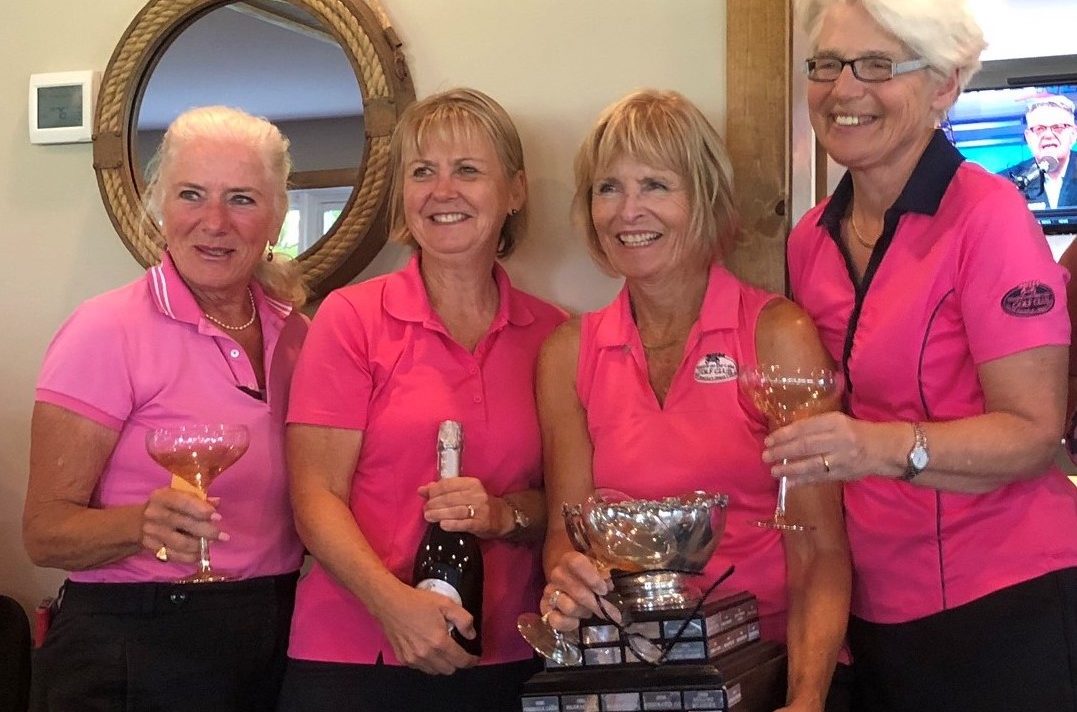 The Wood Trophy championship team from Niagara-on-the-Lake from left to right was made up of Sharron Marlow, Yolanda Henry, Martha Cruikshank, and Ginny Green.

Sandra Billyard is finishing the 2019 golf season with a flourish.

The Port Colborne member carded a 76 to edge out club mate Barb Brown for the overall gross title. Billyard also shot 76 to win the Champions crown.

“I was really happy with my play,” Billyard said. “My driver was great and of course each thing I won this year, they have all been in Port Colborne. It made it nice and comfortable.”

Home course advantage is definitely that at Port Colborne.

“The course suits my game and I find it very forgiving except for the greens,” she said. “The greens are the big thing because a lot of girls were coming in and saying that the greens were tough.”

Not so much for Billyard.

“When they are your own greens, you know where they are fast and slow and when to bump and run it in. That was huge to me.”

In the past 20 years, Billyard has won low gross at the Wood Trophy tournament five times. It is one of the more important titles for women’s golf in Niagara.

“What makes it a big deal is that it is a Niagara District championship and it used to be a Golf Association of Ontario-sponsored tournament,” she said. “At one point, it was really big because it was a GAO event and now we’ve taken it over, but it still is a district event and it’s great.”

One might think Billyard would want to take advantage of her winning streak and have the competitive season continue on, but that isn’t the case.

“I want it to end so I can just go and play some golf and not worry about shooting a good score,” she said, with a laugh.

Overall, it was a good season for Billyard.

“I was happy because it seemed like everything that I played in, I was fortunate enough to win,” she said. “You know yourself that you play some and sometimes you don’t do well in any of them.”

Among Billyard’s other 2019 victories was a best ball event at Bridgewater.

Organizer Karen Vamplew was happy to finally have the tournament played after having to cancel the event on two previous dates.

“Severe, threatening thunderstorms caused us to postpone in July and in August, the club had 20 millimetres of rain through the night and the course was closed for the morning and no carts,” she said.

Other big winners included: Twenty Valley member Sharon Gibson, who carded a net 69 to win the Flo Monroe Memorial Trophy (low net senior); and, the Niagara-on-the-Lake team of Martha Cruikshank, Yolanda Henry, Ginny Green, and Sharron Marlow, who captured the Wood Trophy with a team net score of 289. The Wood Trophy was first presented 53 years ago.

Below are the other award winners: