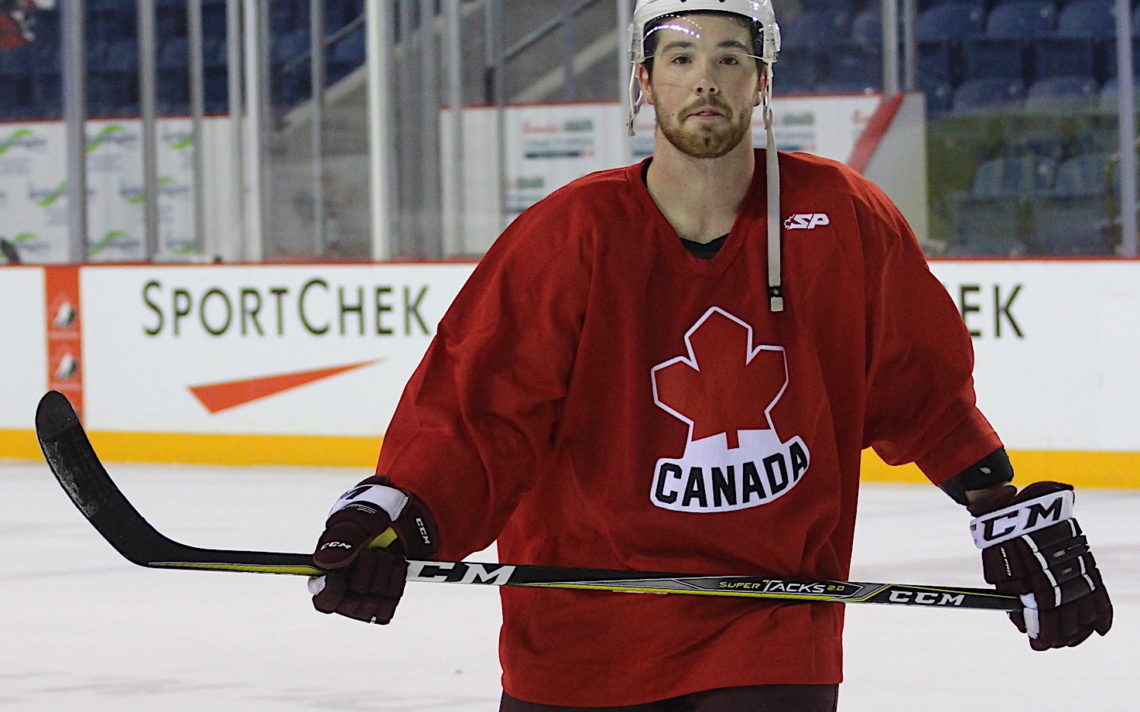 Hunter Garlent is looking forward to a rare opportunity to play a hockey game in front of hometown fans.

The 22-year-old Thorold native is a member of the U Sports all-star hockey team that will play a two-game set versus Canada’s national junior team prospects. The games are scheduled for Wednesday at 7 p.m. and Thursday at 4 p.m. at the Meridian Centre in St. Catharines.

The games are part of Canada’s selection process for the 2018 IIHF World Junior Championship slated for Dec. 26 -Jan. 5 in Buffalo, N.Y.

“It’s a great experience,” he said. “They are some of the best young talent in the world and a couple of guys I played against when I was still in junior.

“I’m looking forward to it and it’s an opportunity to play in my hometown for the first time in a few years and to have some friends and family here.”

The 5-foot-9, 182-pound forward had plenty of his own experiences suiting up for Team Canada as part of the under-16, under-17 and under-18 national teams and as a member of Team OHL in the 2014 Subway Super Series against the Russians.

“My linemate in our selection year was Nick Ritchie and he ended up going on to make it when they won that year in Toronto,” Garlent said. “It was kind of cool to hear about his experiences and there’s a great opportunity for some of the kids here.”

Garlent would have loved to have gotten the call for the world juniors but it never happened.

“It is a dream because on Boxing Day the entire family is together and you watch the game,” he said. “Any time you get to put the Canadian logo on your chest, it is a great honour but at the end of the day you work as hard as you can and you take the opportunities you are given.”

After a stellar Ontario Hockey League career where he notched 107 goals and 269 points in 292 games with the Peterborough Petes and Guelph Storm, the 10th overall pick in the 2011 OHL draft found an opportunity with the Saint Mary’s Huskies in the Atlantic University Sport league.

Last season, Garlent had 18 goals and 45 points in 30 games and was named the AUS rookie of the year, an AUS all-star and a Second Team All-Canadian. He is off to another strong start this season with seven goals and 29 points in 18 games.

“It actually started pretty rough, but with any transition to a new league there’s an adjustment period,” he said. “But we’ve got a good group of older guys and our class year we came in with 10 rookies so we all got to go through the experience together.”

His rough start included going pointless in his first five games and not scoring until the sixth game of the year.

“I had high expectations for myself and wanted to take an offensive role right off the bat but I struggled,” he said. “It took a lot of deep breathes to keep from getting too frustrated and gripping the stick too tight.”

He was helped through the rough patch by the team’s veterans and coaching staff.

Garlent had plenty of interest from Ontario universities but chose the Halifax, N.S., school after careful consideration.

“It’s a new experience when you are talking to schools and there’s no trades so you are making a four-year plan for yourself,” he said. “I tried to do my own research on the school, the city and the overall experience of where I was going to live.”

“I felt it was a great fit overall and it was something I looked forward to doing.”

Garlent is studying business at Saint Mary’s and hopes to go into entrepreneurship.

In 2016, Garlent had a taste of pro hockey, playing in the playoffs with Adirondack in the East Coast Hockey League and hasn’t closed the door on resuming his pro career in the future.

“I’ve seen guys move on, even guys I played with last year at Saint Mary’s,” Garlent said. “We had one guy go to Italy and guys at the end of their fifth years went and played in the East Coast league and really enjoyed themselves.”

He could see himself doing the same and will use his time at Saint Mary’s to mature as a hockey player and as a person.

“A dream would be to tour the world a little bit and have an education in my back pocket for when I was done.”

Garlent had perfect timing to take part in the two games versus Canada’s junior hopefuls. He wrote his final exam Dec. 7.

“I got a little down time before it began to skate and work out a little bit,” he said. “I get to pack my bags from the hotel and go down one exit further and I’m at my house.”