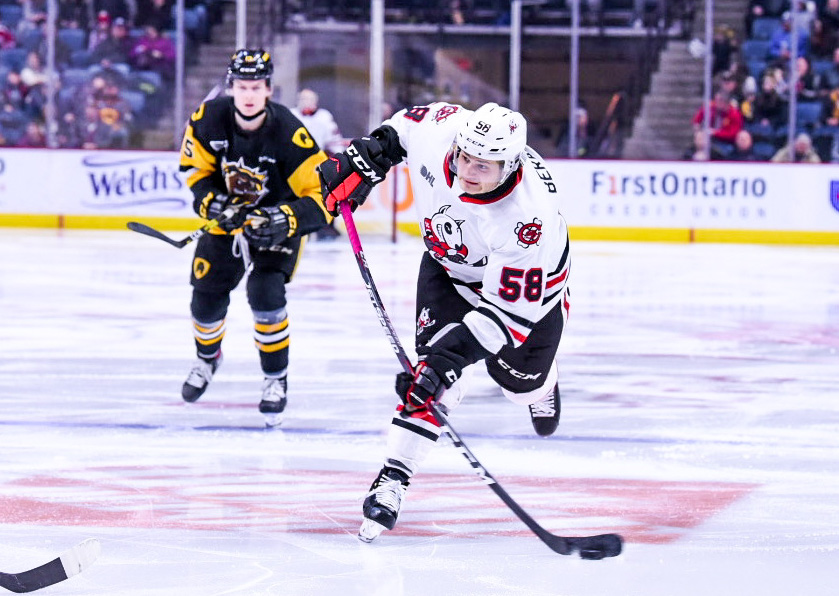 Adrien Beraldo, who is expected to be one of three overage players for the Niagara IceDogs, has committed to Ryerson University for next season.  Photo by: ALEX LUPUL.

Adrien Beraldo isn’t giving up on his dream of playing pro hockey, but when the Niagara IceDogs defencemen was offered a spot with the Ryerson Rams, he jumped at the opportunity.

“They approached me pretty early,” the 21-year-old Stoney Creek resident said. “It’s a lot different now because of COVID. Everyone is signing early and they’re recruiting guys early that might not go pro or who want to go to school and get that done.

“Who knows what’s going to happen and spots are filling up quick.”

Beraldo feels committing to Ryerson is a win-win scenario.

“As of right now, there is no (OHL) season, there are no start dates,” he said. “My goal is to play pro so in order to get seen and maybe get a tryout or get someone’s attention, with school now at least I know I have that and if there is a season, who knows what could happen?” 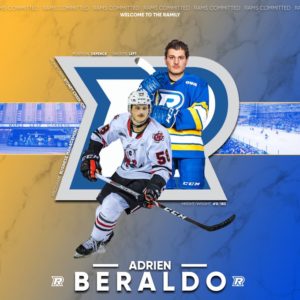 Beraldo, who will pursue a Bachelor of Commerce at the Ted Rogers School of Management, felt Ryerson was the right choice, on and off the ice.

“I was talking to some other teams but made the decision that it would be the best for my development and I got into the program I wanted,” he added.

Beraldo, who began his junior career with the Ancaster Avalanche of the Greater Ontario Junior Hockey League before moving to the Ontario Hockey League with the Peterborough Petes and Kingston Frontenacs, admits it has been difficult to sit at home for more than a year due to the pandemic.

“Obviously it’s frustrating. You look around and the other leagues across the world, everyone is playing. Our league is the only one (not playing),” he said. “It’s pretty tough on the mental side of it, especially when you are skating and you hear stuff.

“I know it’s a tough time for everyone and they’re looking out for the best interests of everyone and keeping everyone safe.”

Beraldo is holding out hope the OHL will find a way to play some type of season, although, time seems to be running out.

“It would be awesome to have a season and get back and leave and leave Niagara on an upward hill rather than how we left it. Hopefully if we have a season, I can teach the young guys something and have someone to look up to.”

Beraldo emerged as a solid, reliable defender with the IceDogs, who also took responsibility as a leader.

“The team was great, the coaches were great,” he said. “They were good people and when you’re with good people it makes everything better. I was having fun. They allowed me to play my game. The biggest thing for me was getting the opportunity. That’s all I ever wanted.”

“I’m happy to see Adrien commit to Ryerson and join a few of his former Niagara teammates,” IceDogs coach Billy Burke said. “It’s a great opportunity to get a university education while also pursuing professional hockey. Adrien is a high character person and a rock solid defenceman who will be a great asset to the Rams.”

Burke feels for the over-age players who may not get a chance to properly end their OHL careers.

“Players like Adrien have certainly suffered the most during this shut down,” Burke said. “Not only are they being robbed of an opportunity to gain a pro contract, an accomplishment that unsigned or undrafted OAs achieve every year, but perhaps worse, they are being robbed of the opportunity to wear captain’s letters in their final year, a huge honour for any player.

“Adrien would certainly be a big part of our back end and a leader for us if we are able to get some type of season in. I hope we haven’t seen the last of him in a Dogs jersey yet.”