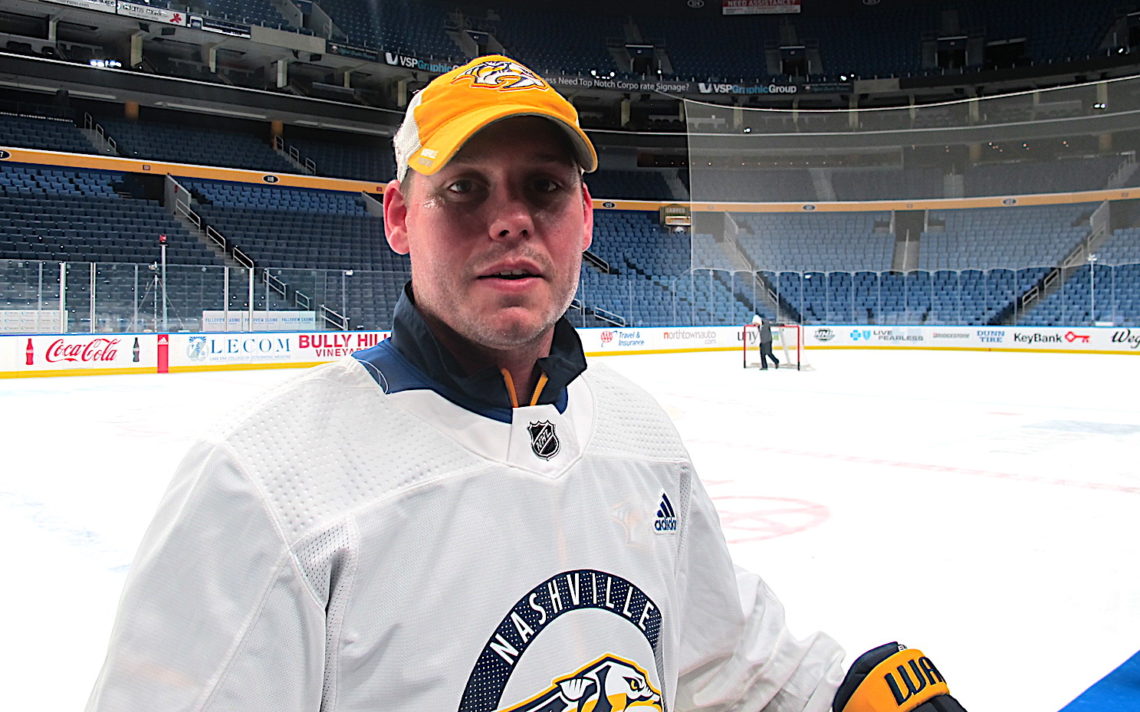 Benny and the Preds

Former Thorold Blackhawks goaltender and Welland native Ben Vanderklok is in his fourth season as the goaltending coach with the Nashville Predators. Photo by BILL POTRECZ.

Ben Vanderklok was so close to winning a Stanley Cup he could taste it.

The 36-year-old Welland native, in his fourth season as the goaltender coach with the Nashville Predators, still can’t quite get past how close the organization was last season when they lost to the Pittsburgh Penguins in Game 6 of the finals.

“I can’t even describe it coming up two wins short of winning,” Vanderklok reflected in Buffalo Monday where the Predators were taking on the Sabres. “I’ll be honest, I thought with time it would get easier, but if anything, it’s gotten harder because you realized what slipped away.”

Vanderklok, who began his junior playing career with the Thorold Blackhawks and also played parts of two seasons with the Barrie Colts, would have loved to bring the Stanley Cup back home to Welland.

“The support from family, the amount of phone calls and texts and reaching out and wishing you luck and say they’re following you, was unbelievable.

“It’s too bad we came up short because there is nothing I would have liked better than to win it with this group of guys and ultimately bring it back to our city.”

The Predators certainly appear well positioned to make another long post-season run being the first team to qualify for the playoffs and leading the NHL in points.

“It’s been unbelievable. Our staff and organization are world class. It’s an unbelievable group of guys,” Vanderklok said. “I am very fortunate to be in this league and to be with the guys I’m with.”

Vanderklok paid his dues along the way, working locally with the Brock Badgers and Niagara IceDogs. He got his break in the pro ranks with the Predators’ organization where he worked with then-Nashville goalie coach Mitch Korn, one of the most respected goaltending gurus in the league.

“I was pretty fortunate where I worked in an environment with Mitch Korn which certainly helped prepare me. I was able to attend NHL and development camps which helped out huge,” he said. “Working in the minors, I had a chance learn the ropes. It was nice to spend five years with him and know what to expect.”

Vanderklok continues to work at his craft, which he admits is a labour of love.

“It’s a job that’s demanding and takes and lot of time and energy but it’s my love and passion. It’s a dream come true to be here and to work with the elite guys in the world is what everybody dreams of doing.

“Some of it is what I expected and other stuff you learn as you go. Some of the experiences that are great help you and some that are tough you learn from and make you better as a coach.” 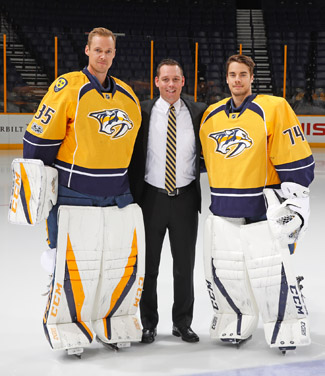 Vanderklok works daily with Nashville goaltenders Pekka Rinne and Juuse Saros, two of the top backstops in the league.

Rinne had high praise for Vanderklok.

“He’s really big into video and scouting other teams. I’ve been fortunate to have Mitch Korn before and I feel Benny has taken it to another level with the technology.”

“I’m trying to have the same mentality and every day try and get better,” Rinne said.  “That’s how he treats every practice. He does a great job and he’s fun to work with.”

Even though his days are spent trying to help the Predators win a Stanley Cup, Vanderklok appreciates where he comes from — he mentioned former Thorold coach Rob Hubbert, ex-Badgers coach Murray Nystrom and former IceDogs general manager Dave Brown.

“There are many people like that. Those big moments in your career really make you reflect on the influence people had on you.”

Vanderklok lives in Nashville with his wife Marlene, also a Welland native, and eight-year-old daughter Ava.

He admitted there are times he can’t believe where his hockey journey has taken him.

“The goal is you wanted to be here. I was fortunate some doors opened. I’m blessed and I appreciate it.

“There’s lot of days my wife and I sit back and think ‘What a life.’ ”

Vanderklok returns home in the summer and helps run his goaltending camps.