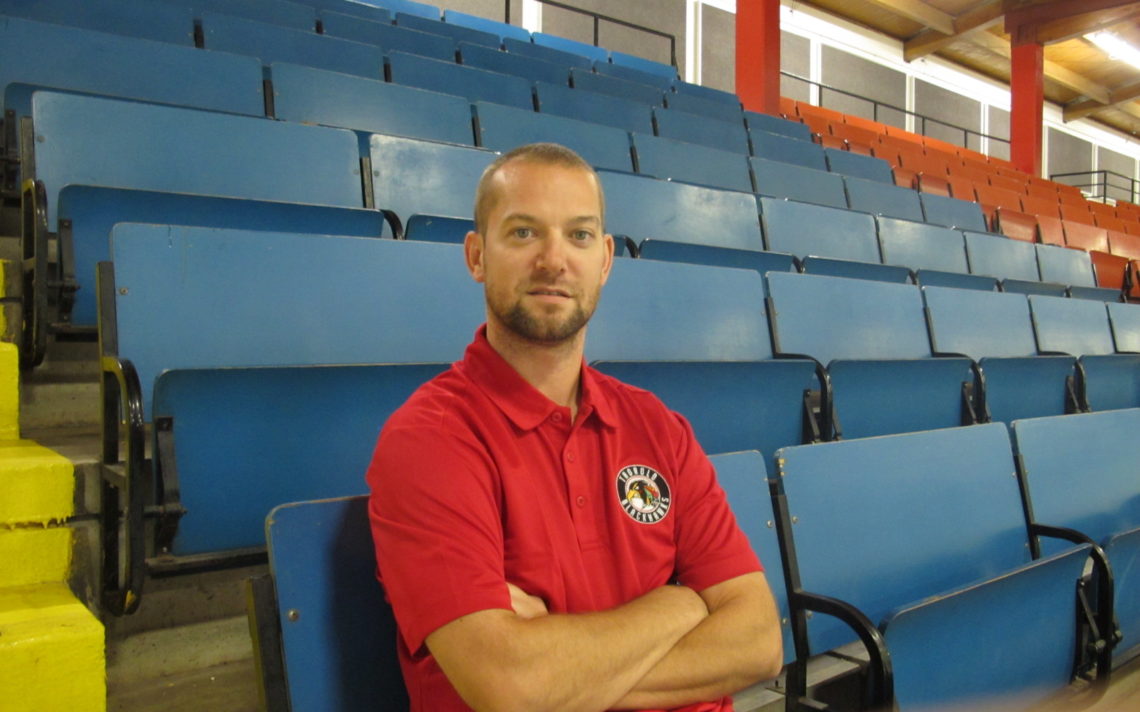 By Bill Potrecz
Scott Barnes is the new owner/coach of the Thorold Blackhawks. PHOTO BY: BILL POTRECZ
The walls at the Thorold Arena were once lined with reminders of the glory years of the Thorold Blackhawks.
Several banners hung on both the north and south walls, tangible keepsakes of a Sutherland Cup championship, a handful of Golden Horseshoe tiles, as well as some individual banners of some of the greatest players ever to lace up their skates for the Blackhawks.
Those banners are gone — at least for the time being — after the arena was given a much needed facelift over the summer. A new paint job, sound panels, new boards and glass are clearly visible in the rink while the lobby and washrooms are now clean and upgraded.
It’s as if there is a new chapter of hockey to be written in Thorold, something that dovetails perfectly with the vision of the new owner/coach of the Blackhawks.
Scott Barnes, who purchased the team from Tony Giglotti and Ralph Sacco, the team’s owners for the past four years, would love nothing better than to restore the franchise to respectability following a difficult ending to last season.
The Hawks lost the rights to retain players when the franchise was suspended and the team’s remaining opponents were awarded 5-0 forfeits in their remaining matchups to close out the season after the club could not ice a competitive team, following a combination of trades, suspensions and injuries.
It was a bleak ending to a troubled season and cast a cloud of doubt over the future of the organization.
“We know we have to start from the ground back up but the goal is to become one of the top organizations in the league,” said Barnes, a 38-year-old Dunnville native. “I know it’s going to take a lot of work and support from the community but we’re establishing that right now.
“I knew coming in here it’s going to take some time to re-establish with the community and get people in the stands and basically get people to believe in the team again.”
Barnes said he’s already made some inroads in that department.
“I think we’re starting to do that,” he said. “We had some players at Terry Fox Run and a lot of councillors (were there) thanking me and glad we brought them out there. It’s just getting out in the community.”
At their best, the Blackhawks boasted several local players such as Chris Risi, J.J. Martin, Joey Martin, Kyle Smith and Sean Bentivoglio. Barnes, who played in the Golden Horseshoe under Rob Hubbert in Port Colborne, is well aware how important Thorold players can be to the small, tightly knit community.
“We have two Thorold kids (Anthony Tremonte and Nick Gidney) and a lot of players from the region. At the end of the day that’s going to help us with the community and helping get people in the stands. I know you have to have some local guys.”
Barnes took over the team in July which only gave him about six weeks to get ready for training camp. That meant a lot of long days and hours doing everything from ordering jerseys to recruiting players.
“The toughest thing is how late we got the team,” he said. “Only having a month-and-a-half before training camp, it was a lot to get going. A couple of extra months would be made it easier.”
It didn’t help that the rink was being upgraded which meant the Hawks weren’t even able to set up their dressing room.
“Everything leading up to our first game was rushed,” he said.
Barnes said he was prepared for some organized chaos. It’s also helped he runs his own hockey development business putting together teams for camps and summer and spring leagues.
“It is a lot of work,” he said. “For me, it’s something that evolved. I’ve been doing hockey development training for 10 years. I basically do this as my job all through the summer putting together teams and running programs and recruiting players and ordering jerseys. This is what I do anyway. Now, it’s just into the winter team.
“It’s more of a step but I’ve already been doing it.”
Barnes, who played professionally in both Europe and the United States, makes no apologies for being a one-man band.
“I like to be in charge,” he said. “I’m not really good at working for people. I’ve learned I’m more of an entrepreneur. My dad is in construction. I could have easily settled into that after my playing career but I’m not good at going to work with a 9-5 job. I like to do something on my own. That’s what led my down this path.”
Still, he realizes how important it is to surround himself with competent help.
“I have some good people in place to help me with the off-ice part of it. I have a good coaching staff and a goods training staff,” he said. “I surrounded myself with a good group. The volunteers for game night have made it easier on me. I’ve never run an organization where I had to worry about game night operations. They have helped run it.
“I’m the man in charge but we have a lot of good people in place to help.”
With their home opener out of the way last week, Barnes can now concentrate on the on-ice product.
“Now, everything is starting to settled down and fall into place,” he said. “I knew that going in. I’ve had the mindset that this year is a feeling out process to learn and see how it goes and see what works and what doesn’t and then next year we’ll be ready to go.
“It is stressful but I know it’s going to be a long process to get it all figured out.”