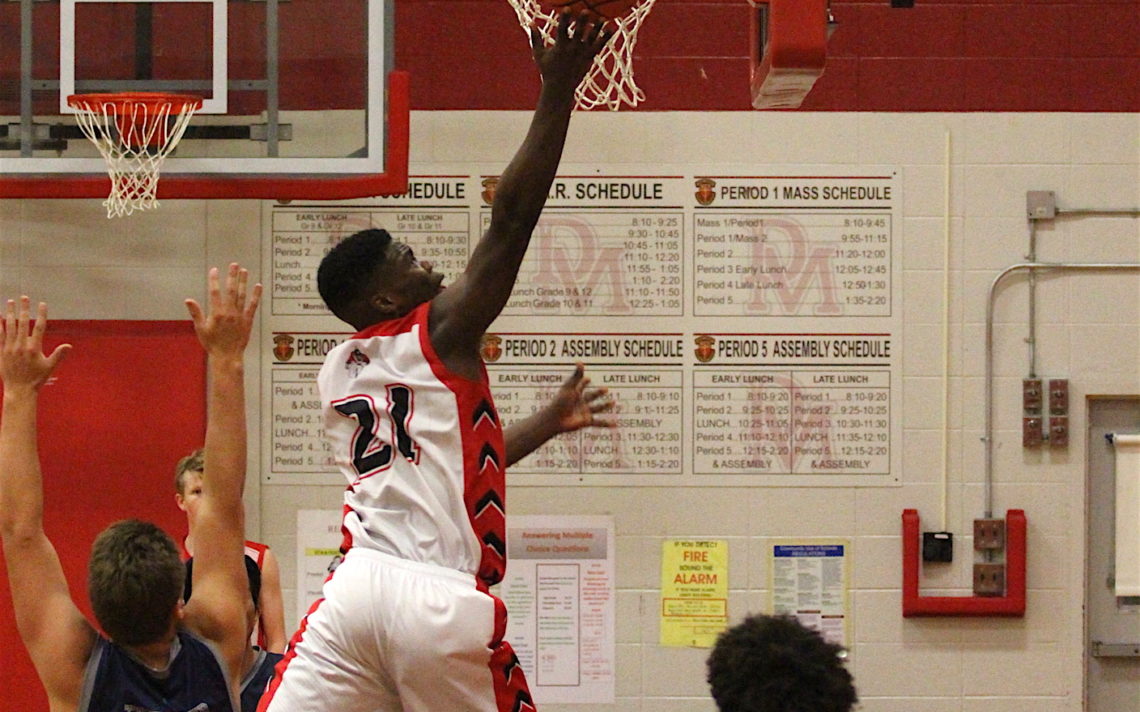 There wasn’t much the Blessed Trinity Thunder senior boys basketball team could do Monday when Governor Simcoe’s Rahim Bardi decided to take the ball to the basket.

“Twenty-one (Bardi) is a strong guy and he can get there when he wants to,” Thunder head coach Gabe Diadamo said.

The 6-foot-3 got there and scored Monday, netting 34 points to power the fourth-seeded Redcoats to a hard-fought victory over the 12th-seeded Thunder.

“What separates Rahim from a lot of the players in the league is his work ethic, his desire to be better all the time, and he does it both in the classroom and on the basketball court,” Simcoe coach Shaun Feor said.

Bardi entered the Standard tournament coming off an MVP performance at the James Walker Tournament in Lewiston, N.Y., where he averaged more than 30 points, eight boards and six assists per game.

“He carries our workload and he is a motivational leader as well,” Feor said.

Bardi fouled out in the opening game of the Walker tourney but didn’t get down as his team ended up winning in overtime.

“He was the first guy clapping and cheering the younger guys on and motivating them to win the game,” Feor said.

The 17-year-old Bardi credits Feor for his development as a basketball player.

“I played AAU ball for coach Shaun and that has really helped me because you play kids in the States who are much quicker and much faster,” he said. “It helped me to become better overall.”

Feor has had a front row seat for Bardi’s development.

“He has played four years for me between junior and senior basketball and he also plays travel basketball for Niagara North which I also coach,” he said.  “He has progressed physically — he is already built for the university game — as well as fundamentally. He has spent the time in the gym to get better.”

The second-year Grade 12 student agrees he has done a lot of work on his own.

“Whenever we don’t have games or practices, I like to go work out and get my own practice in and take shots.”

He also lifts weights at the YMCA almost every night.

“I would really love to play at the next level and I think I can,” he said.

“Definitely there was mutual interest between the school and Rahim,” Feor said.

Rahim, who graduated with honours this spring, thinks he made a positive impression while in North Carolina.

“I think the coach was pretty impressed and he wanted to see actual footage of me playing in games,” he said.

He has also talked to Queen’s University.

Before his high school career ends, he would like to go out with a flourish at the Standard tournament

“I love this tournament, especially when you play in front of your home fans,” he said. “It’s my last year so I want to try and bring home the championship final to Simcoe.”

Thanks to 13 points in the first quarter by Zeenan Ahmed and 10 points in the second quarter by Kyle Love, the Thunder gave Rahim and the Redcoats a big scare early. They led for most of the first half before entering the break down 32-30.

The eighth-seeded Thorold Golden Eagles advanced to the Standard championship quarter-finals with a 59-45 victory over the ninth-seeded Greater Fort Erie Gryphons.

BPSN Star of the Game: Simcoe’s Rahim Bardi with 34 points.

Up next: Simcoe plays Denis Morris in the championship quarter-finals at Governor Simcoe at 7:30 p.m.Tuesday. Blessed Trinity meets Collegiate in consolation play Tuesday at 6 p.m. at Simcoe.