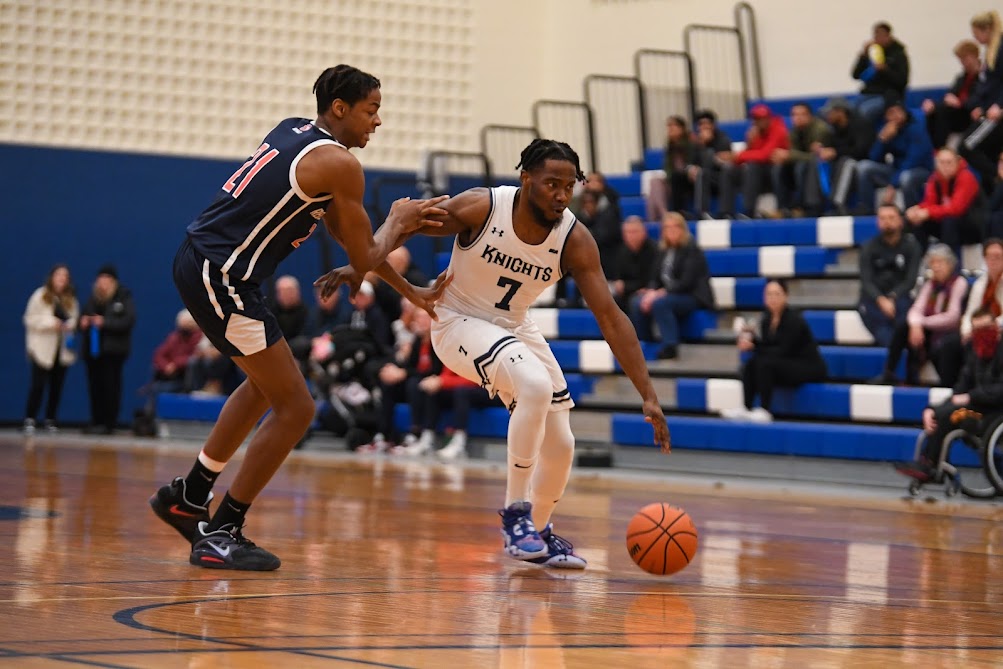 After three years of action with the Niagara College Knights men’s basketball program, Rahim Bardi was accepted into a sports performance program in the United Kingdom.

Following careful consideration, the 23-year-old St. Catharines native decided to defer those plans for one year to continue to chase his hardcourt dreams in Welland.

“I just think that we have a really good group of guys this year and it would be a great year to make a run for an OCAA (Ontario Colleges Athletic Association) championship with a chance to go to nationals and win big.”

A successful finale is important to the 6-foot-4 forward.

“I have been here for four years now on the basketball team and before I stop playing basketball I want my career to mean something here at Niagara. A championship would be huge to bring to Niagara.”

“He’s one of our veteran leaders. The great thing about Rahim is he works tirelessly on the court and off the court and he does all of the things we ask him to do: strength and conditioning and getting in extra shooting work outside of practice. He is just that kind of player for us over the years.”

That leadership came in handy during the pandemic.

“He really kept us together through COVID, organizing and getting the guys together for online workouts. That exemplified his leadership because it was difficult during those times and we did need guys to keep us together.”

The Governor Simcoe alumnus relishes his leadership role with the Knights.

“We have a pretty young group of guys this year and being a leader is something I take pride in. It helps to ensure when they are in my position, they will know what to do and how to lead other teammates as well.”

His leadership through COVID was a way to help set an example during difficult times.

“Once COVID hit, it was very unfortunate when we realized we couldn’t get in the gym and we couldn’t go anywhere,” he said. “It was a matter of finding things to do with the team. We had a lot of Zoom meetings and every week someone was in charge of coming up with a workout and relaying it to the other guys.

“It was a cool experience but at the same time, I’m glad we were able to get back in the gym and get together again.”

This season, Bardi has started 10 of 12 games for the Knights and is averaging 7.3 points and 4.1 rebounds in 23.1 minutes of playing time a game.

“We have been really happy with his leadership and his play on the court. He is still trying to define his specific role as we introduce new players to the program,” Mosley said. “Any time you have a fourth-year guy, they have to figure out how their role evolves over the years. He is doing that and he is such a team-first kind of guy. He exemplifies our program.”

Bardi agrees with that assessment.

“When the year started, I thought I would have to be more of a scorer but it is finding what the team needs in an exact game,” he said. “It could be rebounding, it could be passing or it could be overall leadership.”

To have that mindset requires maturity as a person and as a player.

“You can’t come into a game with the mindset of doing something specific because as the game goes on, you realize other stuff needs to be done for us to win the game,” he said.

Bardi is studying recreation therapy after graduating from fitness and health promotion and completing two years of general arts and science. He has had a blast on the court during his time at Niagara.

“I love being here and playing in front of our home fans and families and I love being close to home,” he said. “It is great to be part of a team because not a lot of people get to experience something like this; being a college athlete and being a leader on a team and having this overall student-athlete experience.”

He has also enjoyed the classroom experience.

“It is a great college overall and one of the best colleges in the province.”

Niagara sits at 7-5 in league play and is tied with Humber and Conestoga for fourth-place in the OCAA West. Lambton is one game back and Sheridan is one game ahead.

“We have a big six games remaining in the season against all the teams that we are close in the standings with or tied with,” Mosley said. “We have to make a push and win some really tough games. We feel we can compete with anybody in the province but competing and winning are sometimes two different things. You have to find ways to close out games and we’re hoping we can do that over the next six.”

Consistency will be key for Niagara’s chances.

“It had been an issue across the board and it is game to game. We have great quarters and then we have some lulls,” Mosley said. “It has been something that we have been battling and we talk about it and we practise in ways to try and counter that by putting in situational plays so that we are ready for everything at the of the game.”

Bardi knows what it will take for Knights to succeed.

“We have put all the work in, we have to do all the little things, put our games together and play with confidence.”