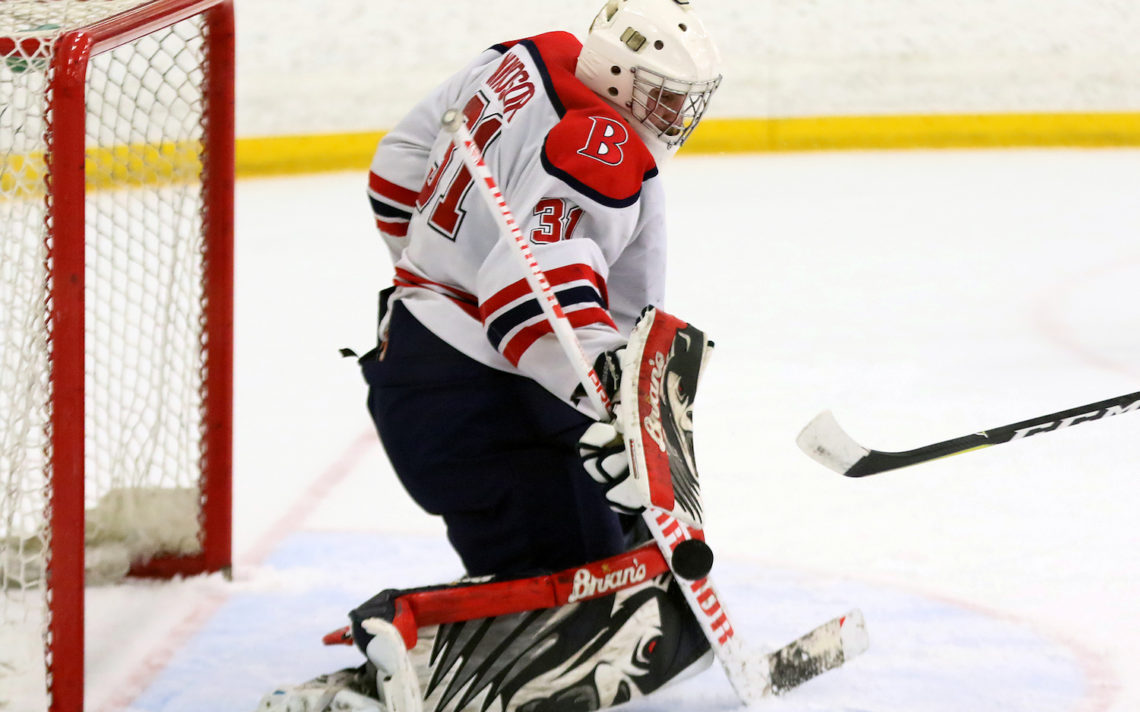 A silver medal is not what Clint Windsor had in mind for his final game on home ice as a member of the Brock Badgers.

The veteran goaltender had to settle for a second best after the Badgers dropped a 5-1 decision to the McGill Redmen Saturday night before in the Queen’s Cup Ontario University Athletics championship final held before a sold-out crowd at the Seymour-Hannah Sports Complex.

The Badgers still qualify for the USport nationals to be held in Fredericton, N.B., but the sting of not being able to win an OUA title on home ice definitely hurt.

“There’s nothing you can really do about it now,” Windsor said. “We still have nationals to look forward to so we’re more focused on that.

“Obviously, it’s disappointing to go out like that, but we gave it our all. They were the better team tonight and they deserved to win.”

Windsor admitted the fact he was playing his last game at home went through his mind before the game.

“We talked about it a bit but it was a good game to be in for our last (home game),” the Hamilton native said. “We could have been done way before this.

“I was proud of the guys the way we battled right to the end. It shows a lot of character about this group.”

Windsor can’t wait to turn his attention toward the nationals, where the Badgers will be ranked fourth out of eight teams.

“To get here is one thing, but to have the nationals to look forward to eases the pain a little bit,” he said. “We’ll regroup and come back and get ready to work to go the nationals and see if we can make some noise there.”

The Badgers fell behind early to the Redmen trailing 2-0 after one period.

Brock rebounded and made in a one-goal game when Ayden MacDonald scored on a power play to cut the lead to 2-1. The Badgers then ran into significant penalty trouble taking five straight penalties which the Redmen used to their full advantage to score three power-play goals and take a 5-1 lead into the third.

“We had a bad six minutes where we took a couple of bad penalties,” Brock coach Marty Williamson said. “We got ourselves back into the game at 2-1 and thought we were playing OK.

“The lesson in championship hockey is you can’t have that (bad stretch).”

Williamson admitted his players could have possibly handled the situation differently in the second after being assessed so many penalties in a row, including one on Windsor for delay of game after the net was knocked off.

“There’s calls there that were borderline that bother you, but absolutely they have to handle their emotions,” he said. “Players can’t worry about shifts before them. They have to worry about doing their jobs and not overreact.

“We caused our own problems and credit to them, they made us pay.”

The Badgers leave Tuesday and Williamson expects Brock’s first game to be Friday.

Badger bits: Williamson was honoured before the game as the OUA Western Conference coach of the year while Windsor was named goaltender of the year . . . Former Welland Cougar and Thorold native Dave Urquhart is an assistant coach with McGill.

For the Brock Badgers: Ayden MacDonald.

Up next: The Badgers advance to the USport Nationals in Fredericton, N.B. next week.