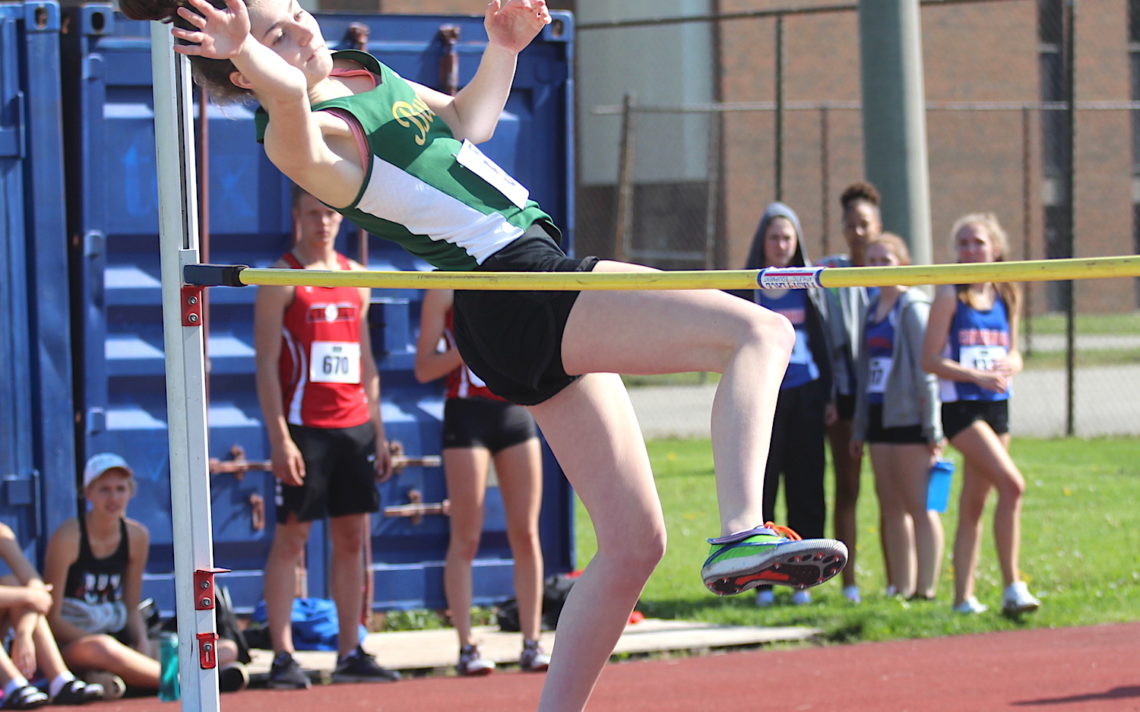 Autumn Bigger is a girl of few words.

The Grade 11 student at Beamsville and District Secondary School prefers to let her actions speak for her and she has done exactly that.

And while the Niagara Regional Athletics member wasn’t quite jumping at that height Thursday, she won the Southern Ontario Secondary School Association senior girls title Thursday at the Niagara Olympic Club with a jump of 1.65 metres. She surpassed the same height the previous week in winning the Zone 4 title and setting a zone record.

Niagara Regional Athletics jump coach Paul Peebles feels Bigger has something that differentiates her from other high jumpers.

“She has that pop to her,” he said. “Other jumpers come in and kind of have a lift,  but when she hits the ground and takes off, it’s just a pop and she snaps off the ground.”

Peebles and Bigger are trying to work their way back to her jumping at a height of 1.76 metres and beyond.

“We kind of lost a step,” he said. “She is going through some stuff maybe because she is getting older and becoming a woman from a teenage girl.

“This always happens around Grade 11 or 12 and you’re never sure what is going to happen that next year with girls.”

Peebles is confident that Bigger’s struggles are just a small blip on the radar.

One area Autumn needs to improve upon is the mental side of jumping.

“She has to work on her mental edge because she is always nervous,” he said. “It becomes tough in a high-pressure situation for her to get over it in her head.

“She is a great jumper but she has to convince herself of that sometimes.”

Bigger is working towards a goal of qualifying for the Youth World Olympics.

“She looks good and we are on target,” Peebles said. “We have a couple weeks before OFSAA and hopefully things will carry through and she’ll keep progressing.”

“She has always had a knack for it ever since public school,” he said. “She started in Grade 4 and she always beat everybody and excelled at it.”

Her success led the family to sign up her up at Niagara Regional Athletics.

“Ever since she has been with Paul, he has helped her get to the next level,” John said.

He feels there’s an easy answer to why his daughter loves the sport.

“I think it the fact that she is doing well at it and it gives her confidence and stuff like that,” he said.

The family has received some letters and phone calls from schools asking about Autumn and there are plans for her to write the SATs.

“We are getting prepared in case she does go,” John said. “We’re not saying she is going to go to the States, but we want to keep her options open.”