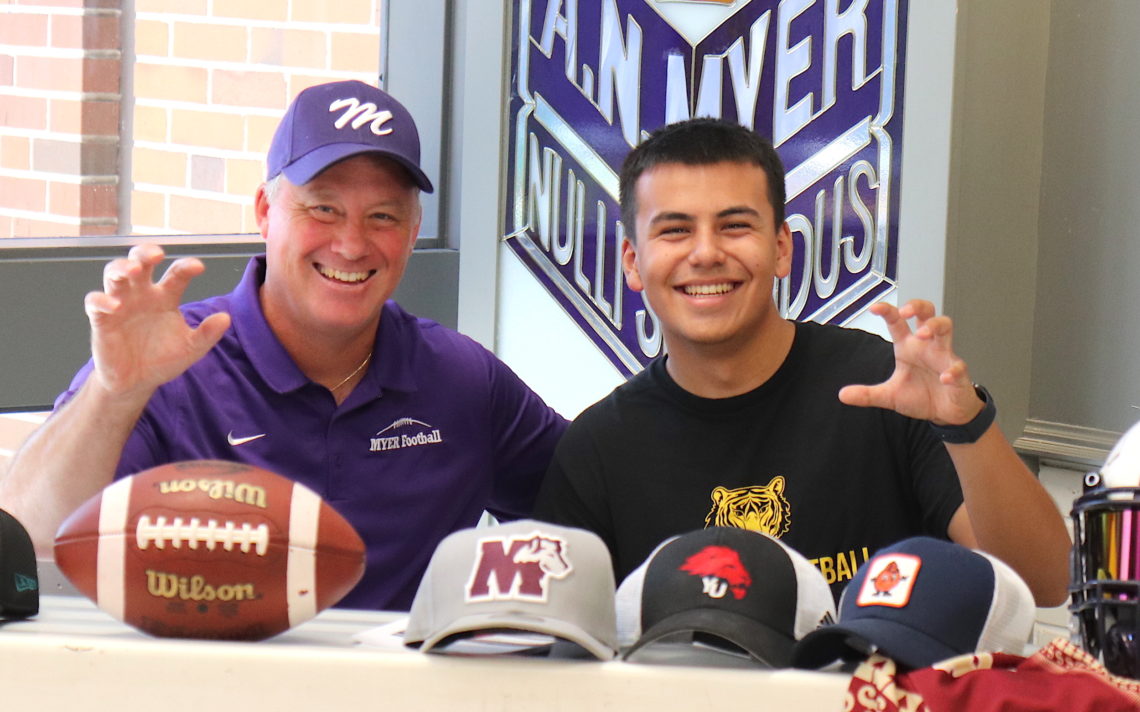 “We all came together four years ago in Grade 9 and we built experiences and memories together. But now, once we are leaving four years later, we are on our own ship and we are all ready to go on our own journeys with the memories and experiences we had at Myer together.”

The 18-year-old Niagara Falls resident’s journey will be to Dalhousie to get an education and play football. He will heed his own words.

“All my teammates here have been amazing and I am going to keep in touch with them. But it is my time to go out and pursue football too.”

The route Arevalo took to land with the Dalhousie Tigers was unconventional.

“He really did this on his own. Often I have a hand in getting kids recruited but this happened on his own through an Instagram page the boys have,” Myer head coach Dave Buchanan said. “He took it upon himself to get that done to play and go to school.”

The six-foot, 205-pounder certainly did.

“I played like I played and I don’t know if I did as well as I could but I took matters into my own hands and I reached out to the coaches. I really made an effort to play at the post secondary level,” he said. “I found the program I liked, I reached out to the coach and we talked. I looked into everything and I knew I would regret it if I didn’t take it. Once they offered for me to come play, I was really looking forward to it.

He feels his football career is just getting started.

“I plan to go on from there. Dalhousie is only the first step.”

“At times it was stressful not knowing where I was going next year and not wanting to give up football, but I was in a position where I could do what I wanted. I could work for it and that is what I did.”

He is happy about his new home and football team.

“The school is pretty nice, the education is excellent and I feel that the team there is growing. I went out there to see the coaches and they said in a couple of years they will be in USPORTS which will be good. They took a chance on me and I am going to go with it and it is an opportunity to learn and better my football skills.”

“My goal once I get to camp is to make an impact and go as hard as I can. I know that I am first year but I want to play and I want to outperform my teammates,” Arevalo said.

He is looking forward to the training and weight lifting.

Arevalo played linebacker for Myer and also took one for the team at times and filled in at guard.

“He’s a tough, hard-hitting linebacker and he is a really bright player. He was valedictorian for our school and that is an amazing thing when you play football,” Buchanan said.

Arevalo was willing to do whatever the Marauders needed, even if it meant playing guard.

“They needed some guys to step up so I did,” he said. “It was challenging to learn at first and it’s not something that you want to do but I got the hang of it and it was fun. It ended up being fun to help my team.”

He played a few years of minor football when he was nine and 10 before returning to the field in his teens.

“I stopped because my mom thought it was too dangerous. I was able to convince her to let me play high school football and I have played every year, except for COVID.”