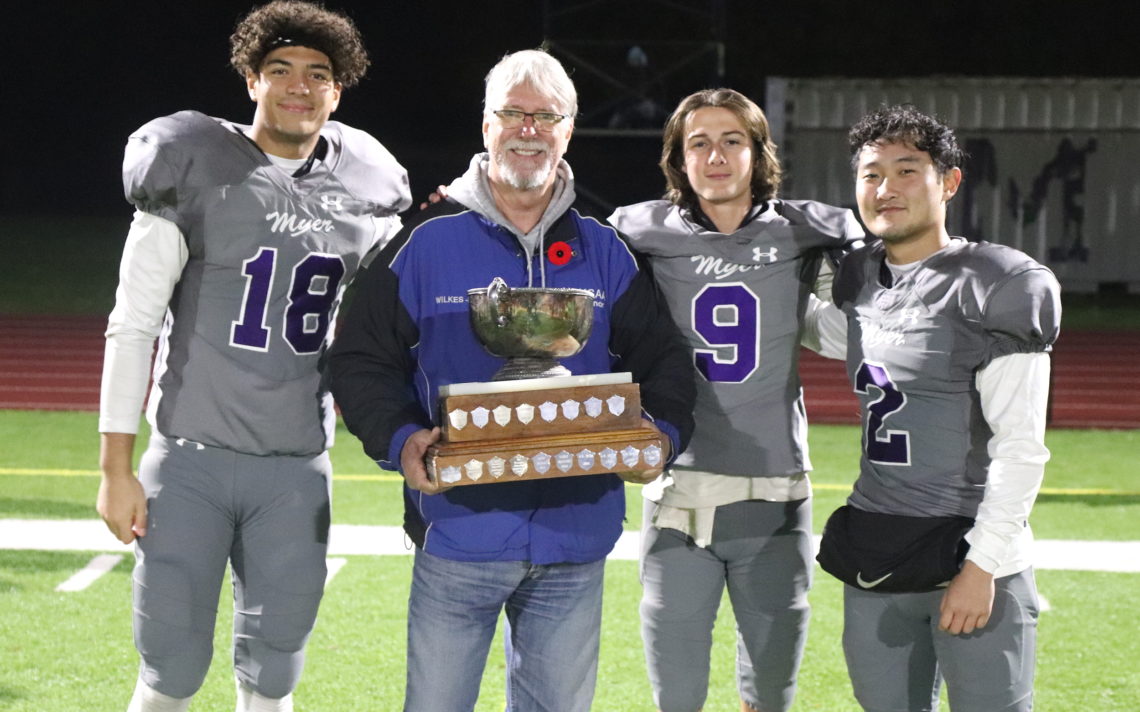 Another championship for the Marauders

“I told the boys that this was the toughest one yet,” Myer head coach Dave Buchanan said. “We have a little bit of a streak and I don’t want to talk numbers because it is bad luck but I feel this was the toughest go. The quality of our league and how the other teams’ players are competing is getting better and better.”

The NRHSAA season has been anything but a cakewalk for Myer.

Myer will go into the bye week prior to a Nov. 16 Southern Ontario Secondary Schools Association semifinal game against a Hamilton school with a banged-up roster. That is testament to how hard other teams have battled the Marauders.

“The physicality of the league is better and I think that was one of the knocks on the league before,” Buchanan said. “There were a player or two or maybe a few teams that had that but each team now is playing hard and they are strong and physical. It was a test because we had guys in rehab all week, and guys getting physio and playing sore.”

One player who stepped up big for the Marauders Thursday was Brady MacEachern, who scored on a 90-yard kick return and on a 48-yard TD catch.

“He played both ways for us when Eugene (Park) went down and we had another player out sick at that position,” Buchanan said. “He stepped up on offence, played defence as well and was all over the field.”

He likes a lot of things about his Grade 12 player.

“I love his speed and he is super smart. He and his twin brother Connor have 98 per cent averages and I love how they represent themselves. And then they compete hard. Everything they do, they do hard.”

The 17-year-old points to two things for Myer’s success.

“The coaches are a big part of it and we have all-around players. Everyone buys in, we all work hard at practice, we all show up and we all play our game.”

MacEachern started the game at defensive halfback and then added slotback duties to his job description. He was thrilled to get a chance to play offence Thursday.

“It was definitely cool to get to do that on championship night on our home field. It was fun.”

Scoring twice was the icing on the cake.

“I usually get in on offence sometimes when we are up by a bunch so it was nice to get a little more playing time there,” he said. “I love playing both. Tackling is great but scoring touchdowns is also pretty fun.”

At the end of the game, none of Myer’s captains wanted to take the NRHSAA trophy off the hands of convenor Sandy Wilkes.

“This game means something and we want to win the DSBN (District School Board of Niagara championship) but we are looking forward to playing Notre Dame in three weeks. This is what it is all about,” MacEachern said. “There is revenge from last year and we all want to see what we can do this year. We have a tougher O line and we have had some bigger boys come up from junior. We are hoping to give them a good fight.”

If Myer does meet up with Noter Dame in the SOSSA final, the team’s NRHSAA opponents have helped put them in a better position to succeed.

Sir Winston Churchill needed a perfect game to beat Myer and the Bulldogs didn’t come through in that regard.

“We dropped balls. You have to be running and you have to be going full pin,” Churchill head coach Peter Perron said. “We came hot and heavy and then we sort of fizzled. There were a couple of what we perceived were bad calls that took the wind out of our sails. It changed the tone and the speed of the game for us, it got in our heads a little bit and they scored right away after we couldn’t get a timeout.”

Myer gained momentum as the game wore on.

“They are a well-coached team and they work hard all year to get to this point,” Perron said. “They are well-deserving of this win. We had scouted them and we knew what we had to do but we just didn’t get the execution done totally the way we wanted today.”

“We are there and it could have went the other way very easily if we made some catches and don’t drop some balls,” Perron said. “I don’t let the score be a disadvantage and we don’t quit. None of my boys quit today.”

The Bulldogs played hard to the final whistle and had two late majors to make the score respectable.

Perron is vowing to be back again next year.

“We will work on it. We have a junior program going with coach (Jason) Babony helping us. I have Scott Hill as my DC (defensive coordinator), Donnie Marshall as my OC (offensive coordinator) and extra coaches which definitely helps us,” he said. “It’s pulling our juniors up, reestablishing that intensity and maybe changing our formats on how we condition for the game so we can speed up our game.”

This year’s experience will also pay dividends next year for Churchill,

“The amount of first-year players we had this year is incredible at the senior level,” he said. “Coming in with that experience against those guys who have been playing quite a bit, I am proud of them. It is amazing what we can do in two months.”

“We know those kids really well. Quinn the quarterback is one of our guys and our guys are really good friends with him. They spend a lot of time in off-season training together,” he said. “He is a great player and the running back (Justin Savoie) and No. 34 (Brady Pupek) are outstanding players. They have a lot of grit and they have young players out there who are tough kids. They are not far away.”

“I have a ton of respect for their coordinators who are doing a great job. Let’s face it. Donnie Marshall’s pedigree is what it is and you can see it. Now that they have a junior program you are going to see that little bit of an edge that they needed will come out in the next two years.”

Cat’s Caboose Player of the Game: Myer’s Brady MacEachern with a 90-yard kick return major and a 48-yard TD catch.

Up next: Myer advances to the Southern Ontario Secondary Schools Association semifinals on Nov. 16.