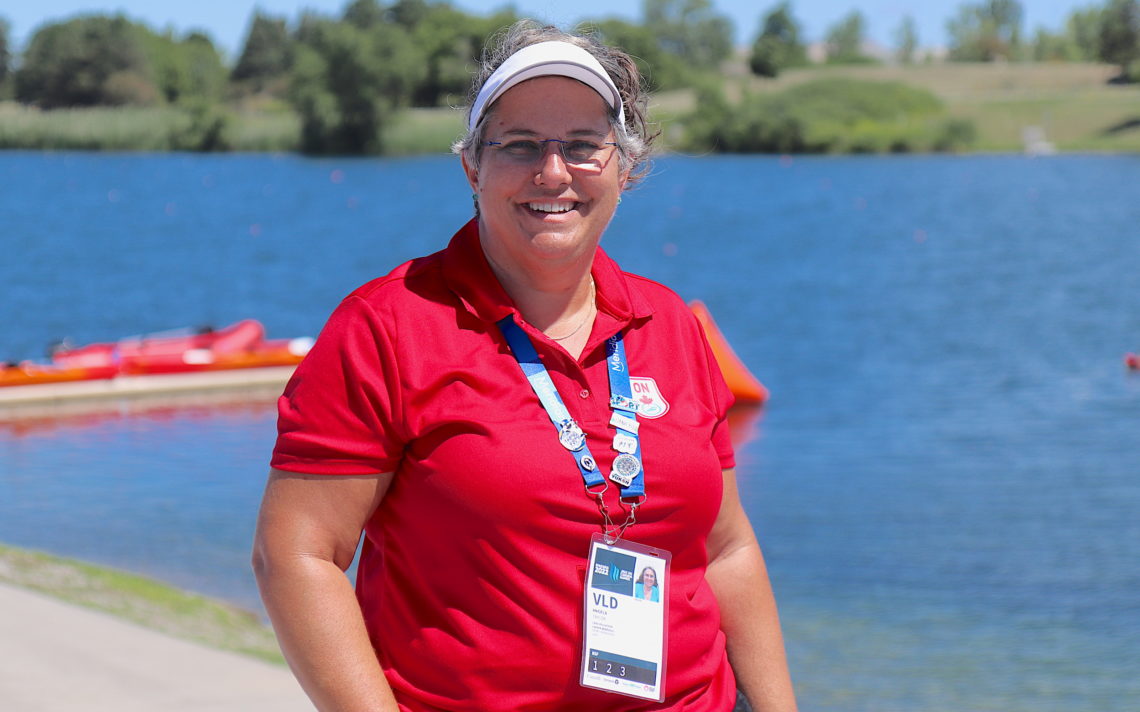 Angela Taylor-made to be swimming lead

After nine days and 101 hours spent at the Brock University pool serving as the swimming lead for the Niagara 2022 Canada Summer Games, no one would have begrudged Angela Taylor for putting her feet up and savouring a job well done.

But the 50-year-old St. Catharines native is not wired that way and Friday morning she could be found at the Welland Flatwater Centre serving another six hours as an official for the finals of the men’s and women’s 3,000-metre open water swims.

“I’ve never worked at an open water before and I’ve never done open water swimming as an official. My kids never did like swimming with the fishes so I just never went and officiated at them,” Taylor said. “I just wanted to experience it and because I was the local lead for swimming, I couldn’t be a major technical official (at Brock). I wasn’t able to actually do any officiating for the days that the competition was on.”

Her days as sports lead at the Brock pool were long but rewarding.

“I would arrive a half an hour before the warmups and I would typically leave anywhere from an hour to two hours after they left because I had to print the program for the next morning,” she said. “I had to wait for the referees for the next day to send the program to me so I could print it and have it ready for the morning.”

Her favourite part of the week was getting a chance to see the medals awarded.

“Once the first day was done when the medals were given somewhere else, we started handing out the medals.”

It was also fun for Taylor to work with her daughter, Courtney.

As sports lead, Taylor had 50 volunteers helping out as well as 36 MTOs (major technical officials) from across Canada.

“I had tons of people, including people from my club that no longer have kids swimming like me. They came and they volunteered every session just like I did. They were there almost as much as I was so it wasn’t just me.”

Taylor was the logical choice to be the swimming lead for the Canada Games.

“I do high school, club, varsity, I run all of the swimming and if you’re going to run a swimming meet in the area, it’s kind of me that’s going to be around it or in charge of it,” she said.

She had swimming officials across Ontario asking her if she was going to apply for the job and then when she was at a meet in Brantford, someone from Swim Canada asked the same question.

“I figured I would put my name in to apply. Otherwise, they would’ve had to try to find somebody else to do it.”

Taylor’s swimming officiating career started 16 years ago when her oldest son was nine.

“If you have a child and they become involved in swimming, you have to become a swim official because you have 50 people on deck and they’re all swim officials,” she said. “They’re all volunteers because if we paid everybody, we wouldn’t be able to afford to put our kids into that sport.”

Taylor and her husband, Scott Taylor, then began to work their way up the officiating ladder. She started running high school meets about five or six years ago and the varsity competitions at Brock about four years ago.

“We decided that we were gonna continue to officiate even when our kids stopped swimming. I do it more than he does because he does the scouting. It’s like our bowling league. That’s what we do together.”

Taylor has run the Ontario University Athletics championships at Brock, helped out at the provincial high schools meets and does the same at regional meets across Ontario.

“If they ask me or if I’m looking to go volunteer somewhere, I just look on the meet schedule and figure out where I want to go and volunteer for the weekend.”

Taylor, a Level 5 official, admits volunteering can be tiring but it’s worth it.

“It’s so the kids can have a fair meet. There were other people there to help my kids have a fair meet when they were younger so now I’m that master official and I go all across Canada. The one year it was like 350 hours of officiating and I volunteered more than I worked that year.”

While Angela’s volunteering duties are now over at the Games — she is planning to take in some of the softball action next week — Scott still has work to do. He is the venue lead at Brock University and he will be involved with the diving competition next week.

“I’m done, yeah, but I went to a lot more meetings than he did. But we’re not keeping score,” she said, with a smile.