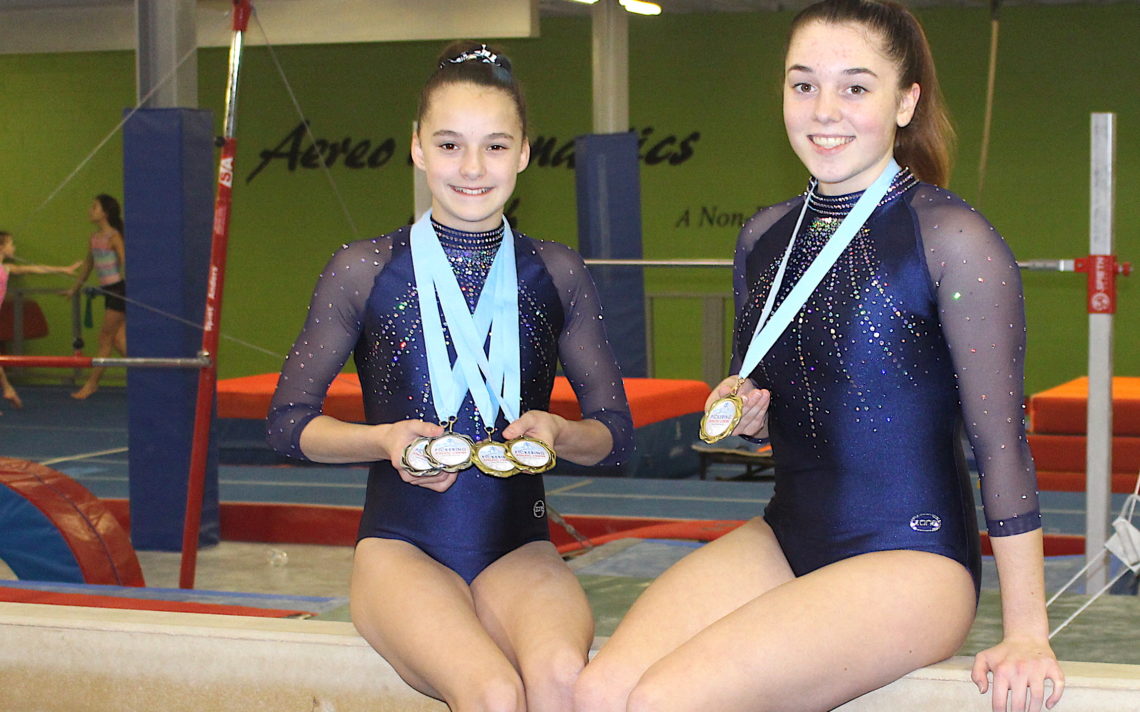 Two members of Welland’s Aereo Gymnastics Club got off to a flying start in the first provincial qualifier in Pickering.

Competing in Level 8 Age 15, Greta Robinson won gold on the bar and beam, was second on the vault and all-around, and fourth on the floor.

Competing in Level 6 Age 15, Sydney Bisci was first on the beam, fifth on the vault, sixth all-around, seventh on the floor and eighth on bars.

Greta is a recent arrival at Aereo, joining in September.

“She was looking for a fresh start at a new gym and she came to us with some prior experience in Level 8,” coach Ashley Cammelli said. “We wanted to set her up for a strong season by perfecting her basics and setting her up to move into Level 9 by next season.”

Greta scored 9.7 on bars at the qualifier which was a big improvement from last season.

“She is a strong competitor, very calm and pretty confident with everything she went into the meet with,” Camelli said. “We were really happy and excited for her at her first meet of the season.”

Greta, a 14-year-old from Smithville, started in gymnastics 10 years ago and has been in the competitive store for the past seven years.

She wasn’t expecting to do as well as she did in her first qualifier.

“The last practice before it I hurt my fingers doing vault and I didn’t get another practice in to do bars,” she said.

Her goal for the season is to get her score in the high 36s (total score for all four events).

Greta practises five times a week and she loves the sport.

She has quickly found a home at Aereo.

“At my old club it was hard because there was a lot of drama that I wasn’t involved with,” she said. “It just wasn’t as fun any more.”

Greta, who also participates in jiu jitsu, doesn’t have any long-term goals for gymnastics. She takes it year by year.

Sydney is in her second year of competing at Level 6.

“We are feeling a little more prepared this season and she has added some new skills,” Cammelli said. “She added some elements on beam and we were super excited with her beam score (9.5) and it set her meet up really well.”

Sydney was the first competitor on beam and her scored was able to stand up.

“It was obviously a high-calibre strong routine for her,” Cammelli said. “This meet has really motivated her to upgrade some of her skills on floor and bars as well.”

Sydney, a 14-year-old Grade 9 student at Notre Dame, has been involved in gymnastics for eight years and has been competing for the past seven years.

She trains 16 hours a week at Aereo.

“I really like doing gymnastics,” the Welland resident said. “It makes me really happy being here and I like doing my skills and performing.”

Her goal going into the first qualifier was to score high on beam — which she accomplished.

“I wasn’t expecting too much on bars, but I’m glad it turned out well and floor was good too,” she said. “I didn’t know what to expect from vault.”

She feels she has already made strides in her second year at Level 6.

“I think I have gotten a lot stronger in all the events and I able to do a lot more compared to last year,” Sydney said.

Her goals for the season are to score even higher on bars and beam as well as the other apparatus.