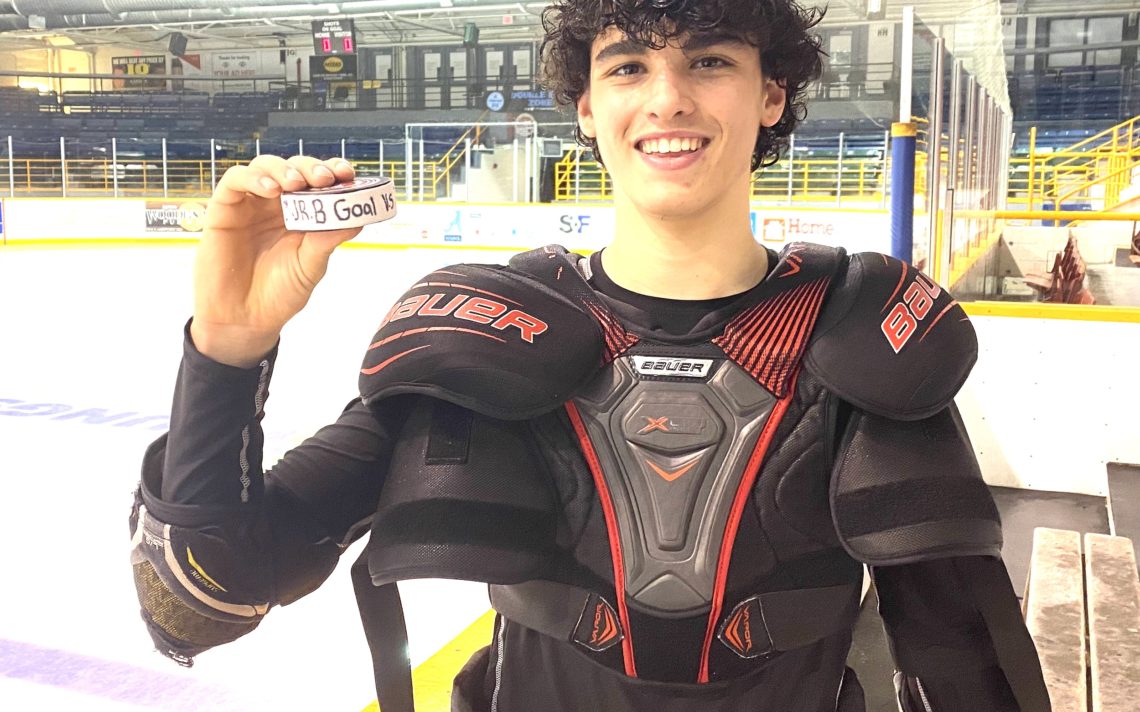 A memorable Knight for Testa

Luca Testa with the souvenir puck after scoring his first two junior goals with the St. Catharines Falcons earlier this season. Testa was selected in the first round by the London Knights in the Ontario Hockey League draft Friday. Photo by: BILL POTRECZ.

All the pieces fell into place for Luca Testa at the Ontario Hockey League draft Friday.

The 16-year-old, Grimsby resident was hoping to be picked by an organization close to home that was committed to winning and he got both when he was selected with the 15th pick of the first round by the London Knights.

“Hearing your name called 15th overall by the London Knights especially was an absolute honour,” Testa said. “I know they are an exceptional organization. They produce amazing players at the OHL level and NHL level.

“I was hoping I would go to London and it came true.”

Testa said he was able to share the moment with his parents, Massimo and Silvia, twin sister Vanessa and other members of his extended family.

“There was a lot of yelling and screaming,” he said. “I had a couple of people recording it. It was a special moment. I’m so happy I had it captured on camera. I had my cousins coming up and giving me big hugs. I obviously hugged my dad first and my mom.

Testa said he tried to remain calm as the draft progressed.

“I didn’t want to worry my parents too much,” he said. “It was an unbelievable experience that I’ll hold forever.”

He credits his sister, who is a top-notch soccer player, with always being there for him.

“She’s been there throughout my life supporting me when times were hard,” he said. “She’s an amazing sister and I have amazing parents. I couldn’t ask for a better family.”

Testa will get a chance to see the Knights in person Sunday afternoon when they host him for a playoff game versus the Kitchener Rangers.

“I’ll get to meet all the guys hopefully and get a feel for it. I know they have the best fan base in all of the OHL so hopefully I get to hear them scream a bit,” he said. “It will be exciting.”

He is continuing his season with the St. Catharines Falcons of the Greater Ontario Junior Hockey League where he has accumulated 10 points in seven playoff games and has often been one of the best players on the ice.

“Luca is a very complete player,” Falcons coach Tyler Bielby said. “He uses his size, skill, and powerful skating to his full advantage. He takes pride in his own zone which is great to see in a young player.

“He has been a big part of our playoff run so far. He dominated in Game 4 of our last series and I think put a lot of hockey people on notice with his performance.”

Bielby is also impressed with Testa off the ice.

“He is fun to watch and be around. As much as his hockey skill and IQ stand out, I am equally impressed with the way he handles his business,” Bielby said. “This young man is wise beyond his years. He practices very strong emotional intelligence. You do not see him get too high or too low. He is always focused on the task at hand and uses his mental toughness to always prepare for this next shift.

“He may say thank you more than he says anything else. I tip my cap to the village that raised him, because I’m a big believer that it’s his character traits that will allow him to continue finding success.”

Testa was one of eight players with local ties who was selected in the draft.

Other locals selected were: